Will he live up to it? 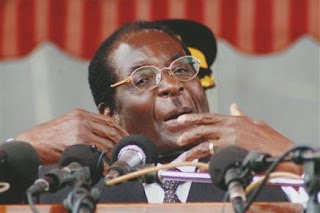 Gordon Brown seems intent on breaking with his colleagues in the European Union over one particular issue and no, it is not the Council mandate aka Constitution Mark II. It is, however an important issue if the European claim to the moral high ground is to be taken at all seriously.

It seems that our new Prime Minister has made it clear that he will not attend the EU - Africa Summit in December if President Robert Mugabe of Zimbabwe is there. As we mentioned (0nce or twice) before, the Portuguese Presidency, intent on strengthening those EU - Africa relations though not on thinking a lot more clearly as to whether the EU's aid and trade policies are at all useful to that benighted continent, has agreed to invite President Mugabe to the Summit because a number of other African statesmen (if that is the right word), led by President Thabo Mbeki of South Africa, refused to attend unless the invitation goes out. It seems that agreed EU rules about ban on visas are less important than threats of non-attendance by African leaders.

According to the same report, pressure is being put on the Harare government to send some senior official in December. With Mugabe's absence everybody's face will be saved.

Strictly speaking that ought not to make any difference, as senior officials are almost as guilty as politicians of the horror that Zimbabwe has become. It is also questionable whether Mugabe himself will go along with this notion or announce that it is all an imperialist plot and insist on showing up at the Summit.

Will Gordon Brown walk out? And what will Lord Malloch Brown say about such behaviour? He already has a good deal on his hands what with questions being asked (all too quietly, I am afraid) of his links with the Soros empire and that whippersnapper David Milliband repudiating the wise eminence's rather self-satisfied words.