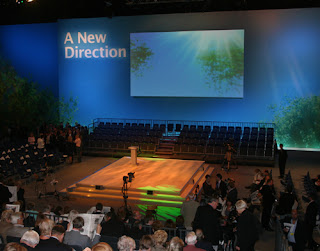 In the event that Gordon Brown calls a snap election in October, The Telegraph is telling us that Cameron will make an EU referendum a key general election issue, giving a commitment to hold a referendum on the treaty.

The relevance of this relies on unattributed claims from "Labour MPs", who are saying that Brown had pencilled in 25 October as a possible date for an early general election, aimed specifically to catch the Tories off guard. However, the paper also adds that next May is seen as a more likely option if Labour remains well ahead in the opinion polls – although that does seem unlikely.

Nevertheless, this raises an intriguing possibility that Brown could be suckering Cameron, allowing him to commit to a referendum as a central plank of his election campaign, only to cut the ground from under his feet by conceding a referendum, as did Blair in 1997 on the euro and in 2004 on the constitution.

That much was raised by The Independent yesterday, and by Political Betting which speculates that such a move could undermine Cameron's attempts to unify an increasingly fractious Party.

All of this can, of course, be dismissed as political fluff, except that Party strategists from both sides will have to consider such issues in their planning for the Party conferences in late September and October.

Either way the outcome will be fascinating as it will give some clue as to Gordon Brown’s true commitment to the European Union – whether he will use the treaty for domestic political gain or whether he will sacrifice the advantage to appease the "colleagues". In many ways, though, the referendum issue could prove the acid test for both leaders.