EU pays to be lobbied on global warming 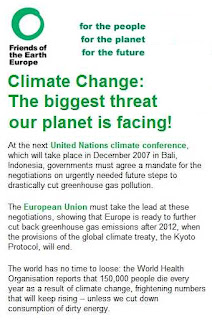 Friends of the Earth Europe, the group pre-eminent in lobbying the EU for tighter controls to combat global warming, received €635,000 in funding from the EU commission last year.

That, with additional funds from German, Austrian and Dutch ministries of environment, plus contributions from the United Nations Environment Programme, accounted for over fifty percent of the group's income, making it primarily a taxpayer-funded organisation.

The extent of EU and member state funding was revealed yesterday by administrative affairs commissioner Siim Kallas to the EU parliament in Brussels, in a speech on the "European Transparency Initiative", an initiative which is set to require groups to disclose the sources and amount of funds spent on lobbying EU institutions.

During the speech, Kallas also revealed that Oxfam had received € 48 million from the commission over two years to carry out development and humanitarian projects throughout the world and that the European Consumer Office, better known as "BEUC", received € 2.4 million.

The fact that Friends of the Earth Europe receives such a large proportion of its total income from the taxpayer, however, is especially significant. The group forms part of the "civil society" caucus to which the commission pays special attention, as part of its programme to encourage "participative democracy" – its response to the low turn-out for EU parliament elections and the fact that commission members are unelected.

Clearly, the fact that its European group is, in effect, a quasi-governmental organisation – although its member groups solicit donations from the public – gives Friends of the Earth a privileged position in promoting its global warming agenda, and its funding from the United Nations further strengthens its position.

This is in stark contrast to the climate sceptic groups and individuals which are largely unfunded – and often have funding withdrawn when they express views hostile to the global warming "consensus", thus giving the "warmists" a clear advantage in promoting their cause.For the commission, this is also advantageous. Having bought into global warming as a major element of its environmental policy, it can be seen to be responding to apparently independent, voluntary groups while, in fact, it is actually paying to have itself lobbied to take actions which, in the main, it would wish to take anyway.

By the spring of 2008, all groups lobbying EU institutions will be required to register with the commission, a measure Kallas believes will increase trust in the EU. However, when the full extent of EU-funded lobbying is revealed, he might take a slightly different view of "transparency" and decide that it is not such a good idea at all.