Who does he work for? 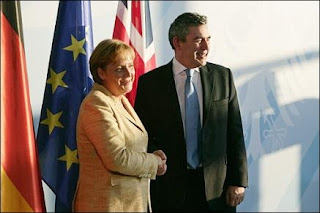 As Brown rushed off to commune with chancellor Merkel yesterday (via Belfast, where he refered to the treaty-to-be as the "constitution"), Deutsche Welle noted that he had departed from "his image as a staunch euroskeptic".

The price for this seal of approval was Brown assuring Merkel of his cooperation on "European" policies, including speedy approval in Parliament of the agreements on "EU guidelines for a new treaty".

This has been marked down by The Independent as: "Brown backs a European Treaty without referendum," reporting that Brown had begun his first first trip abroad since becoming prime minister with a pledge to introduce the treaty without calling a referendum in Britain.

With up to 80 percent of his own electorate in favour of a referendum, this is interesting behaviour by a British prime minister who, in theory at least, is responsible to his own voters. Here he is, at the first available opportunity, making pledges to the leader of a foreign power to refuse a referendum, in defiance of his own voters' wishes.

On this, we are told, Brown was quite explicit, advising Merkel that it would be possible to make rapid progress on setting a date for the treaty. "We will not require a referendum on this. It is something that can be worked on closely by Parliament. I think we can make progress quickly on this," he is cited as saying. One really does wonder about the "we" he is talking about. It does not seem to include his own people.

Much, in fact, has been made of this trip to Berlin, scheduled before even a trip to Washington, with German newspapers interpreting it as a sure sign of a shift away from Tony Blair's focus on the US. Since Mr Brown seems to be rather keen to rush into the arms of the "colleagues", they could well be right.