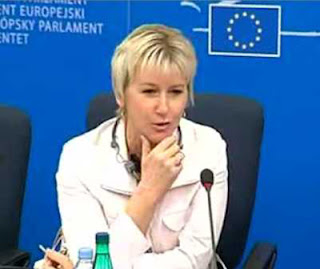 Today in the EU parliament in Strasbourg, Margot Wallström, Vice-President of the EU commission spoke to the Leinen report on the intergovernmental conference. The naked arrogance of this extract from her speech tells its own story. Note the comment: "But I do not think we should allow that":

Mr President, honourable Members, there must be a position between Pangloss and his over-optimism and Eyeore the Donkey thinking that everything is hopeless. It is a very rare thing in politics to get a second life and I am not referring to internet role-playing. Remember that, less than a year ago, the Constitutional Treaty or the idea of having a new treaty was declared dead, on life support or in a coma. And now we are discussing a ratification procedure coming up very soon.

I think that engaging now in a blame game will not help us a bit, and, as a final comment on this debate, I have two things to say. First of all, on the Charter of Fundamental Rights, the European Commission does not like opt-outs. We would have preferred not to have any opt-outs. But what was the real political choice here? It was a weakened charter without legal force or a charter that is legally binding for the EU institutions with an opt-out, or preserving the full text of the charter. Then, I prefer to have a charter which is legally binding, and an opt-out is also an opt-in so this is not cast in stone.

My second comment is that I would like to say that I assume that Members of Parliament do not consider parliamentary ratification less democratically legitimate than referenda.

Some Eurosceptics of course hope that the challenge of informing citizens and engaging citizens about and in such a complex issue as a treaty can be turned into a weapon that can kill further European integration. But I do not think we should allow that.

Also, regardless of what ratification method is chosen by Member States, we are all obliged to inform, to engage, to debate, to discuss with citizens all over Europe and this is what we now have to commit to, to do together, in full cooperation and in a planned manner. This is also how we will contribute from the Commission side. So, I will come back to you very soon with that kind of planning for a proper and democratic and open and transparent ratification procedure.

With that I also wish the Portuguese Presidency all the best with opening the IGC.

You can see from the tone that the "colleagues" scent victory - and they are prepared to brook no delay. No niceties from our Margot about sovereign nations negotiating the terms of a treaty - "now we are discussing a ratification procedure coming up very soon." To her and her "colleagues", the treaty is a done deal and, already, they are planning to interfere in the ratification process.

And this is before they have the treaty in the bag. Once they've got it, they will be unstoppable in their arrogance. For the first time in my career as a Eurosceptic, I am really worried. This thing has to be stopped, no matter what the cost.