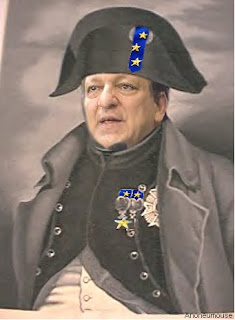 Like a tsunami, Barroso's surprise claim that the EU was an "empire" is spreading out from its epicentre at Strasbourg, to crash against the shores of the British print media.

First in line is The Times which is running a lengthy piece today – and many more are to follow.

David Charter does the business for The Times, focusing on the British perspective, writing that, "Britain was told yesterday that it was part of a new European empire", styling Barroso as, "the Brussels bureaucrat who would be emperor".

We are told that "nervous aides" inquired after his press conference whether this description might feature in British media reports, while EUX.TV reports that Barroso's spokesman, Johannes Laitenberger, asked some of the journalists present not to pay too much attention to the comments. In a desperate attempt at damage limitation, he tried the reassuring line that, "No one needs to have imperial nightmares." 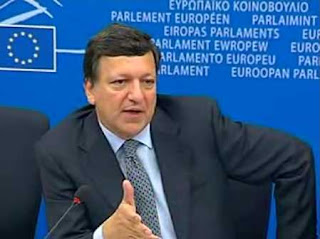 Too late though, the gaffe was out of the bag and, as Charter notes, Conservatives and Eurosceptics alike have been quick to exploit the commission president’s candour, to press Gordon Brown for a referendum.

Mark Francois, the Conservative's shadow Europe minister, happily declared that, "The British public will be surprised to hear that we are now part of an EU empire," adding, "anyone who thinks that we have been exaggerating in calling for a referendum on a revived constitution only has to look at what Mr Barroso has said to realise the scale of what is now being contemplated."

Francois, whether he knew it or not, put his finger on the spot, as the "empire" claim came in response to a question from a Dutch journalist asking, what will the European Union be when the treaty-to-be had been concluded? Not a superstate, but an empire was the short answer, the longer version now up on U-tube. 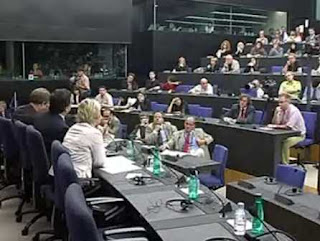 Funnily enough, this is not the first time Barroso has used the E-word. In his speech at the 50th anniversary celebrations of the EU in Berlin, he referred to celebrating "the success of the European 'empire of law'". Not only that, he boasted, "We have created a new and better European political order. Now we must use this experience to create a new and better global order."

Perhaps it was the lack of media reaction, even after the speech had been publicised by the commission, that lulled him into a false sense of security. But, if he didn't realise the significance of what he had said then, he surely will today when all the "cuts" come in. This will haunt him for the rest of his tenure as emperor president.

My guess is that, when we come to write the history of the referendum campaign – for a poll that must now surely happen – this will prove to have been the turning point.

Pic by Anoneumouse. He's back!