The help is appreciated 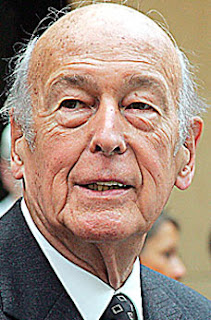 England Expects does it, and it is picked up this morning by The Telegraph - Valéry Giscard d'Estaing admitting that differences between the (proposed) new treaty and the EU constitution, "are few and far between and more cosmetic than real".

This ageing French politician also suggests that this will give Gordon Brown "problems" denying voters a referendum, saying: "As the substance, in institutional terms, is similar or even the same, countries that feel this change has to be approved by a referendum have a problem that they have to settle."

Nevertheless, Giscard – like the rest of the "colleagues" - has advised Brown against an "uncertain" referendum, predicting that British voters would do the same to the new treaty as the French and Dutch did to the old constitution. Instead, with all the hauteur of his clan, he insists that the new treaty mandate is too complicated for ordinary European citizens to understand.

Nevertheless, Dehaene also insists the issue is not one for the voters, whether they are British, French or Dutch. "Europe will never go forward by referendum," he says: "Leading is showing the way, not following."

The more of this drifts out, the better, as all that comes over is the overweening arrogance of the "colleagues", intent on foisting their agenda on the peoples of Europe, whether they want it or not.

Fortunately, in addition to the Telegraph, The Daily Mail also carries the story, having Giscard declaring that the term "constitution" had been dropped simply to "make a few people happy".

However, it is only these two "right-wing" newspapers that are "banging on", although the Tories are also keeping up a low-level harassment on their website. It will, nevertheless, be a struggle keeping this issue in the media over the long summer, so the help we are getting from the "colleagues" is much appreciated.