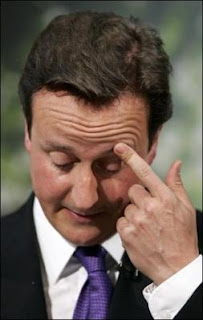 With Brown's Labour Party soaring in the polls – enjoying a nine point lead over David Cameron's Conservative Party – even the staunchest of the Cameroons can no longer deny that "project Dave" is veering off the rails.

This is no mere "Brown bounce", but a decisive rejection of Cameron, who attracts a mere 27 percent approval rating as Conservative leader, compared with 43 percent in February.

But what stands out in the poll is the broad support for a referendum on the EU constitution, with 58 percent in favour with only 17 against (25 percent don't knows). Given that this issue is one of the very few where there is clear blue water between the opposing parties, the inference is obvious. Rather than avoiding "banging on about Europe", Cameron has everything to gain by pushing hard to achieve the referendum that the majority want.

That much is articulated in The Telegraph by Frank Field, minister for welfare reform in the Labour government from 1997-98. He writes that the EU leaders' attempt to foist a new constitution on their respective electorates offers both Gordon Brown and David Cameron their first real chance to impose their image on the politics of the post-Blair era.

Cameron, he adds, has found some of the right words to denounce the treaty, but has not seriously engaged the prime minister on this issue. He should snatch up the gauntlet of Brown teasing him with the prospect of an early election by declaring that, if an election was held during this year or next, he would commit a Cameron government to holding a referendum on the treaty.

For sure, as is already evident, Brown (and his acolytes) will mock Cameron, seeking to denigrate his new-found Euroscepticism

But the fact is that an EU referendum is one of the few issues on which Cameron can score and where Brown can be easily wrong-footed. And, at the moment, as the polls demonstrate, he has nothing to lose.