Have these people no shame? 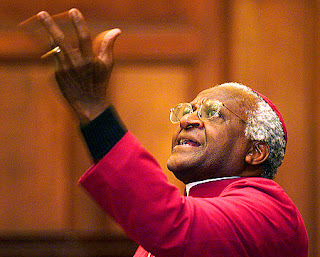 Contrary to some people’s opinion, it is not often that I get incandescent with anger. But the story of the Elders, chaired by Bishop Desmond Tutu, which I have posted about once, is one of those that get me into that state. I am told that I give good interviews on such occasions, so something useful comes out of the process.

This afternoon I recorded a brief interview on the subject with More4, from which they were going to pick one or, maybe, two comments. I don’t know which ones they picked but they were all absolutely furious.

Let us have a look at the concept. A number of past politicians of dubious record and some present tranzi activists are going to get together at the behest of Richard Branson, whose business, I should have thought, requires some attention at the moment, and Peter Gabriel, another fading rock musician.

The Elders will be independently funded by a group of "Founders", including Branson and Gabriel.

Desmond Tutu serves as the chair of The Elders—who will use their collective skills to catalyze peaceful resolutions to long-standing conflicts, articulate new approaches to global issues that are or may cause immense human suffering, and share wisdom by helping to connect voices all over the world. They will work together over the next several months to carefully consider which specific issues they will approach.

What could be more fatuous? These people have no wisdom to share as they are demonstrating by assuming that all global issues that cause immense human suffering can be solved by the same people. Even Edgar Wallace’s “Four Just Men” did not take anything like that on.

As it happens, I have an immediate suggestion for Bishop Desmond Tutu, ex-President Nelson Mandela and his wife, Graça Machel. There is this country, called Zimbabwe, right on your doorstep. Plenty of immense human suffering there. You have time to spare on world problems, which all just happen to be caused by the United States in President Mandela’s estimation? Well, how about spending some of it on that country on your doorstep? 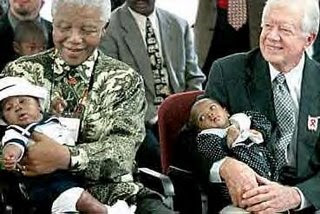 Or if you think matters have gone too far there and one needs to nip problems in the bud and conflicts when they start brewing (as they did in Rwanda when former SecGen Kofi Annan refused to strengthen the UN contingent more than ten years ago), then how about South Africa?

There are numerous indications that the country is not having a good time and that time is going to get worse. Why not try to solve those problems now? An added advantage will be that you will not have to leave carbon footprints all over the world, which is undoubtedly a consideration for the Elders, as you are already there.

Of course, former SecGen Kofi (father of Kojo) Annan and former President “Jimmah” Carter will have to fly out to help you but that cannot be helped.

I am surprised, I added caustically, that they have not asked that African Elder, President Robert Mugabe to join the group. Now, there is a man who knows how to settle conflicts. Or what about former President Giscard d’Estaing, erstwhile best friend of Emperor Bokassa?

So much for the concept. Now, let us have a look at the members of this august organization: Nelson Mandela we have spoken about and Desmond Tutu. Then there will be, as I mentioned in the previous posting, former SecGen Kofi Annan, the man responsible for the Rwanda genocide and the Iraq oil-for-food scandal to mention but two of the best-known episodes in his life. Our readers can be assured that I mentioned both of them.

Former President Jimmy Carter, I said, is without any doubt the worst president the United States had in the twentieth century, bar none. Ah but, my interviewer said, he is a very good ex-President. I went back to being incandescent. As an ex-President, I said contemptuously, he certified a clearly fraudulent election in Venezuela as being absolutely free and fair. On top of everything else the man “achieved” he enabled Hugo Chávez. And let’s not even talk about his pronouncements about the Middle East. 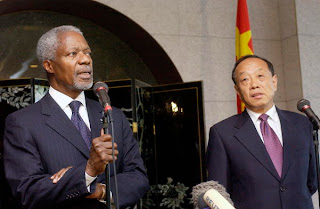 Then there is the former Chinese Foreign Minister, Li Zhaoxing. To be fair to my young interviewer, she thought that very peculiar. Exactly how is a Chinese politician an independent person? As Foreign Minister, he represented one of the worst tyrannies in the world, where they arrest and torture people for meditating or writing journalism. 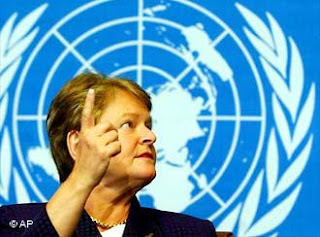 The rest of the Elders (Mary Robinson, Muhammad Yunus, Ela Bhatt and Gro Harlem Brundtland) are not quite so obnoxious though they are not all that attractive, being the usual bunch of tranzis, many of them, curiously enough also directors of the United Nations Foundation, one of the funders of this global caravan serai. Come to think of it, I wonder how much Gro Harlem Brundtland, the inevitable Scandinavian representative of political wisdom, had to do with Norway’s despicable behaviour over the funding of terrorists in the Middle East.

Well, there we are, ladies and gentlemen, another bunch of incompetent and worse tranzis, who will travel round the world, get themselves photographed in various picturesque places, preferably with lots of suffering people in the background, weeping crocodile tears, blaming America and/or Israel, then demanding that American sort out whatever problems has cropped up.

I ask again: have these people no shame?