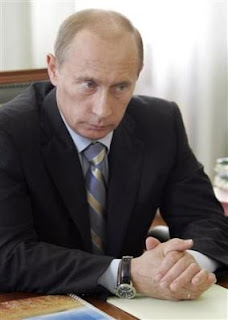 Having spent a good deal of the last 48 hours talking to various parts of the media about Russia and her relationship with Britain and the European Union, I feel it is time to take stock of what the situation is, preferably without the hysteria that accompanies all discussions of Russia in the MSM.

Starting with the latest development, that is the expulsion of four Russian diplomats from London, one has to note that the situation is far from what it used to be in the cold war. What used to happen is that specific diplomats or trade attaches would be singled out for what they were deemed to have done and were expelled. Within 24 hours the country in question would return the compliment and the game would go on for a few days when the real negotiations started or the whole story died.

We do not know for certain which Russian diplomats were picked to be expelled and whether they had been on somebody's list before the Litvinenko case, Russia's non-compliance with British requests for Andrei Lugovoy's expulsion, being used merely as an excuse.

Nor it it clear why the decision to expel was taken now. After all, it has been clear for some time that Russia will not hand over Lugovoy to be interrogated and possibly charged in Britain unless, possibly, Boris Berezovsky and Akhmad Zakayev were offered in return, both, as it happens, an impossibility.

Berezovsky is now a British citizen and the Russian demands have not been backed by any serious evidence of wrongdoing. In the case of Zakayev, a court decided some time ago that he could not be handed over because of the likelihood of extremely bad treatment and the unlikelihood of anything resembling a fair trial.


Today's Sun (picked up by the BBC) carries the slightly odd story of a foiled attempt to murder Berezovsky at the Hilton. The Russian ambassador is denying any knowledge of it but then he would, wouldn't he. Could be. Who knows? My own guess, for what it is worth, is that the Russians would prefer to put Berezovsky on trial in Russia and revive the good old Russian tradition of show trials and confessions. Failing that, I suppose, they might decide to try to kill him though, unlike Litvinenko, he is not an ex-KGB man.


What of the Russian non-response, which has been flummoxing people here? Why did they not expel a few Brits of various description immediately? Announcing, as the Deputy Foreign Minister did, that the response will be firm, targeted and adequate but no innocent people will be hurt, sounded a little like King Lear's famous rant: "I will do such things/What they are I know not yet/But they shall be the terror of the earth".

Time has gone by and the Russian response will have to be somewhat big. Expelling diplomats several days after the original insult is a little lame. So, what might be the big thing?

Easing BP and, perhaps, Shell out of Russia? That is happening already and will go on until the entire energy industry is in the hands of the Russian state, despite the fact that oil production is already going down. It is possible that BP will be forced to surrender its last holdings on the pretext of it being war with Britain over the expelled diplomats.

Other British firms might be expelled but that would not be a very sensible move. Expelling diplomats hurts nobody. Expelling wealth creating enterprises that employ many people hurts the host economy and President Putin cannot afford to do so.

Invading Britain? Seems a little unlikely given that the Russian forces are in a bad state and incapable of dealing with Chechnya.

Suspending collaboration in the fight against terrorism, as it was put to me in the discussion I took part in on the BBC Russian Service? Exactly, how much collaboration is there and how much would Russia, so close to several of the hotspots, gain by suspending activity? After all, as I pointed out, Russian military and technological dealings with Iran do not precisely help the global fight against terrorism.

There is the other possibility and that is Russia being afraid of retaliating because Britain has another ace somewhere up its sleeve. This would tie in with the reported comment made by Oleg Gordiyevsky (now CMG), based on who knows what sort of information, that there is Polonium 210 in the Russian embassy in London (just down the road from Notting Hill Gate and very close to the coveted Notting Hill houses). Then again, British authorities cannot enter the embassy and, in any case, would the Foreign Office manage to secrete another ace up anybody's sleeve.

There is a pattern in Putin's behaviour in international affairs and it is this rather than some world-wide anti-Russian conspiracy that has deprived that country of almost all its friends. First he allows relations to deteriorate, then he has a hissing fit and tries to bully all and sundry, then if the country in question stands up to him and his siloviki he retreats pretending that nothing much has happened and Russia has once again displayed its renewed economic and political strength.

In the meantime, back in Russia, the place which matters as far as Putin is concerned, the notion that Russia is surrounded by enemies whom it successfully challenges grows, creating an ever stronger feeling of hysteria. How long before the people (narod) or the workers and peasants (rabochiye i krestyanyi) will plead with the President not to abandon them to their fate, to change the Constitution and become President for at least another term or, possibly, life?

Meanwhile, Reuters reports that Boris Kusnetsov, a lawyer who has defended several people against the police and other authorities, who has acted on behalf of Politkovskaya's family and the families of the Kursk sailors, has had to flee the country after a legal case was started against him on charges of revealing state secrets (all to do with wire tapping and other activity of that kind on the part of the security services).