Drowned out by the domestic agenda (to use rather an unfortunate phrase, considering the weather) the EU treaty-to-be gets short shrift in the papers today. This is despite the fact that the IGC starts tomorrow and our Europhile foreign secretary, David Miliband will be jetting off to Brussels to defend Britain's interests.

This, at least, is the "take" offered in a very short piece in The Sunday Times which has Nicola Smith writing under the headline, "Miliband ready for EU fight".

Miliband, we are told, "will be on the defensive when he makes his Brussels debut tomorrow", given the "legal doubts about the strength of the British opt-out from the treaty's Charter of Fundamental Rights".

He is, writes the fair Nicola, "also expected to face a battle to maintain UK independence in foreign policy." On foreign policy, she adds, "concerns have already been raised that Europe could take the UK's seat on the United Nations security council when presenting a common position."

This is really cut-and-paste journalism, but it conveys a degree of naivety which gainsays any idea of hacks being hard-bitten and cynical. Does anyone really think that Miliband is going to defence British interests, or do anything other than applaud the "colleagues'" attempts at sliding the EU constitution past the peoples of Europe?

Meanwhile, The Economist has its own "take" on the Ealing by-election, suggesting that, although it was bad news for Cameron, it was, perhaps, worse for the EU. 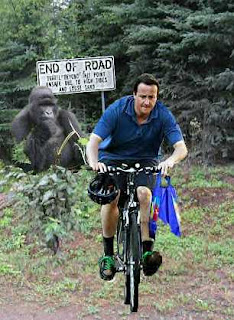 The defeat of "project Cameron", says The Economist, hurts the modernising tendency within the Conservatives, and strengthens those who want a shift away from the centre. Hence, it reasons, Cameron will face calls to re-embrace "such familiar Tory shibboleths as anti-Europeanism and stricter limits on immigration".

Brown, on the other hand, is having a painful time fighting off demands for a referendum on the EU treaty-to-be, mainly – we are told - because he cannot speak aloud the real reason not to have a referendum (he would lose it, plunging Britain's EU relations into a deep crisis). At least then, we get the truth – or The Economist's version of it. He has to pretend that the new treaty is so different from, and so much more modest than the old constitution, that a national popular vote is not needed.

Nevertheless, the magazine thinks Brown will eventually get away without a national vote, simply because Cameron can only hammer away at the topic for so long but will then have to drop it, otherwise he will irritate voters. But all this changes with Ealing. Cameron chances of fighting off the "loons and bores" are now weakened, even though "a betting man would still put money against a referendum in Britain".

But if the unthinkable happens, muses the magazine, and Brown feels obliged to call one, and a "no" vote prevents Britain from ratifying the new EU treaty (destroying it in its current form), recall that the road to disappointment in Lisbon (where the new treaty is due to be signed), took a wrong turn in Ealing Southall.

That, as one might say, is an interesting perspective, and one at odds with this blog. In our view, a weakened Tory Party is less likely to prevail.

Anyhow, tomorrow Miliband is due to give a statement to the House on the IGC and will be answered by Hague. We might then get some idea of which way the post-Ealing Tories intend to play the "Europe" card.