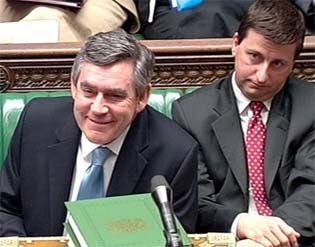 Our provincial governor, Gordon Brown, yesterday drove a cart and horse through the 150-year-old tradition where the annual legislative programme is revealed only by the Monarch in a speech to parliament.

In so doing, he told MPs that his was a "listening government", outlining a detailed list of proposed legislation and promising to consult Parliament and the public before implementing "his" measures – many of which stem from Brussels diktats. Interestingly, he made provision "for region-by-region deliberation and responses", these being Euro-regions, of course.

That brought the Boy Cameron to his feet asking, inter alia, whether the Brown was really listening to people's priorities. Some 86 percent of people in this country, he declared, want a referendum on the European treaty: "So where is the Bill for a referendum? Does that not show that his promise to listen is a complete and utter sham?"

Putting the "straight question" – one of three – he asked whether Brown would "give the British people a referendum on the European constitution, which they all want?". But, as we have come to expect, we did not get a straight answer. Instead, Brown chose to invoke the enemy within, saying:

I think that he should listen to some other voices in his own party. The debate within his own party is raging at the moment, with Lord Heseltine saying that, as a result of our achieving our red lines in the negotiations, if we can secure the amending treaty, there is no case for a referendum. Perhaps, in the spirit of consultation, the right hon. Gentleman should consult his own party on these matters. 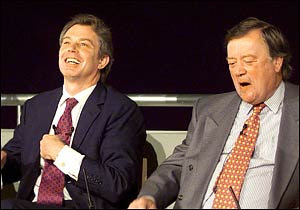 So this is now the role of the Tory "fifth column" – to run interference for the "colleagues", giving the provincial governor a wedge with which he can split the opposition. As long as the dinosaurs hang on in there, they can be used to portray a divided party and thus dilute the effect of demands for a referendum. So much for a "new" government - Brown is following along the same old tramlines set by his predecessor.

Strange it is that those people who are working so assiduously to destroy our own parliament are those who are most voluble about parliamentary ratification of the treaty-to-be.