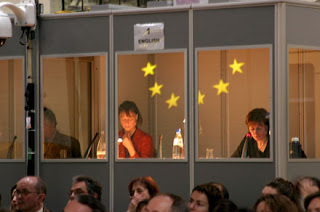 In and amongst the hyperventilation over the treaty-to-be in the Empire's parliament this week, the Members of the Empire's Parliament (MEPs) found time to deal with a report on translation costs.

Produced by Finnish MEP Alexander Stubb, in the account retailed by Euractiv.com we are told that the collective institutions waste some €26 million through booked but unused translation services. This is because it costs about €1,500 per interpreter per day in the parliament (the commission pays around €1,000), regardless of whether the interpreters' services are being used.

The waste is part of the €511 million (2005 figure – it is much more now) paid for translation in the parliament, the commission and the council. Stubb calls for "more efficient means to evaluate productivity and costs, assess translation needs, manage translations, control their quality and increase inter-institutional co-operation." Furthermore, he questions the need to have every document translated into languages such as Finnish, Swedish or Maltese. 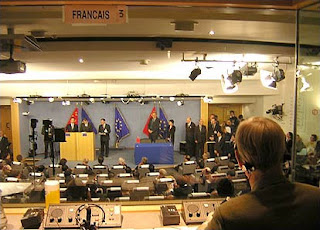 Everything does not need to be translated into all the official languages, he argues. For example, in the committees of the parliament, it is sufficient to have translations in languages used by the members of the committee in question. Other translations can be provided if requested.

Well might Stubb question the burgeoning cost of language services, considering that the United Nations (not normally a model of frugality) manages to survive with six official languages: Arabic, Chinese, English, French, Russian and Spanish; while the secretariat uses two working languages, English and French. 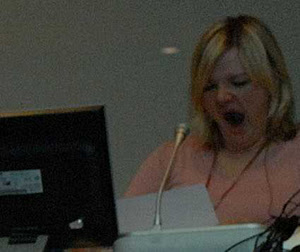 For all his concern for economy, however, Stubb believes "multilingualism" is one of Empire's main assets: "The EU's language services, including both translation and interpretation, amount to only less than one percent of the total costs of the EU. Not such a high price to pay for democracy and efficient co-operation," he declares.

And therein lies the mindset. It is very easy to prattle about democracy, and dismiss more than half a billion in expenditure as "not such a high price", when someone else (i.e., the taxpayer) is paying. One wonders how many translation services would survive if the "colleagues" had to pay for them out of their own pockets.