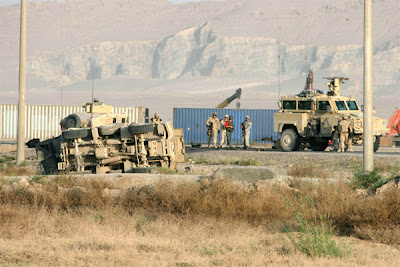 Following yesterday’s news of a British soldier being killed and two injured after their Pinzgauer Vector have been targeted by a roadside bomb, we learn of a different fate experienced by Canadian troops.

Near Kandahar yesterday, in a convoy comprising two RG-31s and an LAV, one of the RG-31s was targeted by a suicide bomber driving a car packed with explosives. According to some reports, the car rammed the RG-31 and, in what was described as "a huge explosion", caused it to roll over into a ditch (pictured). However, the four occupants emerged unscathed - no one was injured.

The MoD really have some explaining to do.