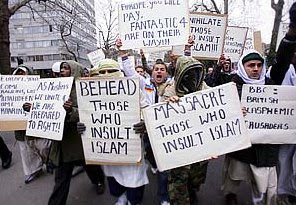 Three men have each been sentenced to six years in jail for soliciting murder during a demonstration against the Danish cartoons.

Mizanur Rahman, 24, Umran Javed, 27, and Abdul Muhid, 25, were convicted during separate Old Bailey trials. Judge Brian Barker, the Common Serjeant of London, said their words had been designed to encourage murder and terrorism.

They were arrested after 300 protesters marched to the Danish Embassy in central London in February last year.

Right! What about those who carried banners, and when are the organisers going to be picked up on conspiracy charges? And what are we going to do about the BBC? I just do not believe the their headline!