Move on … nothing to see here! 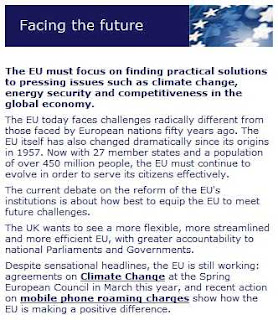 The government's White Paper on the IGC is up on the FCO website.

With the really catchy title, "The Reform Treaty - The British Approach to the European Union Intergovernmental Conference, July 2007", it is part propaganda… and part propaganda, with the usual red herrings about protecting Britain's "red lines".

At 42 pages, the document is boring, and intended to be so – that is the core of the emerging strategy, summed up in one short paragraph:

This amending Treaty will allow the EU to move on from debates about institutions to creating the outward-facing, flexible Europe that we need to meet the fundamental challenges of globalisation.

It is that theme which is highlighted in the introductory passage, which tells us that: "The EU must focus on finding practical solutions to pressing issues such as climate change, energy security and competitiveness in the global economy."

In other words, boys and girls, don’t bother your pretty little heads about the details of this treaty – only the "loons and bores" are making a fuss about it. This treaty is simply about how best to equip the EU to meet future challenges.

It is in that context that we can see the Europe minister, as reported by the Telegraph, dismissing calls for a referendum as "absurd". We want to get on with things - we're "facing the future" - and these silly Eurosceptics mustn't be allowed to hold us back, is the underlying message.

Of course, the broader media – to say nothing of the bulk of the political blogs – are falling in with that agenda. The lack of coverage screams out indifference: move on … nothing to see here. It is boring doncha know. And so, in the shadows, do the colleagues thrive.