Where is Giscard in this line-up? 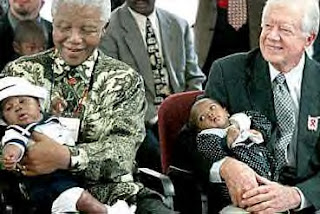 James Taranto's daily "Best of the Web" column on the Wall Street Journal website is usually full of goodies. Todays effort ended with a delightful item entitled "No Country for Old Men".

It led one back to an article in the Washington Post, that informed the world that:

Former South African president Nelson Mandela plans to announce on Wednesday the creation of "the Elders," a group composed mostly of retired global leaders that will seek to tackle urgent world problems unfettered by the politics of any one nation, officials with the group said.

It will have about a dozen members, including former president Jimmy Carter, former U.N. secretary general Kofi Annan and retired Anglican Archbishop Desmond Tutu of South Africa. Among the organizers of the effort have been rock star Peter Gabriel and British airline mogul Richard Branson, who has used meetings at his Caribbean getaway, Necker Island, as an incubator for creation of the group.

It only needed the involvement of Richard Branson to turn what was clearly a comedy into an out and out farce.

James Taranto, I fear, is a little unkind, saying hurtfully:

About Castro - does he know something the rest of us do not?

I do have one question about this line-up of extinct volcanoes? Where, oh where is former President Giscard d'Estaing?
Posted by Helen at 23:24