Hoist with his own petard 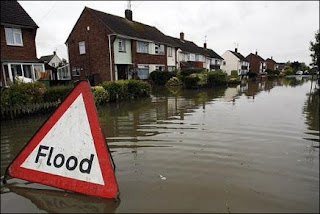 The Beeb and its fellow-travellers (not least the moronic Times) have been quick to harness the recent flooding to the global warming bandwagon. Latest in the line of pundits, on the midday news, is Sir David King, the government's chief scientist.

As a qualified surface chemist, latterly slayer of animals (foot and mouth) and now climate expert, he told the BBC that there was an "underlying trend" of increased rainfall, attributable – according to the climate models, to global warming. That, he said, brought with it the risk of "extreme events". In King's view, therefore, there was no doubt that climate change was a "factor" in the recent floods.

King, though – as always – is not telling the whole truth (has he ever?). there are indeed many predictions of increased precipitation linked to global warming but, on one thing most of the modellers seem to agree; that we will be seeing a trend towards larger rainfall totals during winter and reductions in summer, especially in southern UK, and an increase in the intensity of precipitation especially during winter.

Now, unless I am very much mistaken, it is currently summer (and easy mistake to make if you missed it) and the recent flooding occurred in the er… southern UK.

Nevertheless, through the passage of time, the long wet and cool summer will be fixed as a phenomenon linked with global warming, just as sure as would have been if we had enjoyed and long, hot and dry summer. Whether it is hot or cold, wet or dry, there is now only one cause – climate change.

But there is a strong political element to this. Inserted into the treaty-to-be, after being included in the Berlin Declaration, is an amendment to Article 174 on the Union's environment policy which, for the first time, explicitly sets out dealing with climate change as a Union objective.

This is going to be the centrepiece of the counter-attack against the Tories' calls for a referendum, using Cameron's enthusiasm for the global warming agenda. Seeing as the treaty-to-be will now include specific mandate to deal with climate change (as if it needed it), the Boy will be accused of hampering the fight against this modern-day evil, by risking the treaty rejection in a referendum - thereby further isolating the "loons and bores".

Not least, the "colleagues" will be able to rely on the Boy's statement during the June European Council meeting then he accused the "EU leaders" of discussing the wrong issues for the wrong reasons, when they should have been debating. inter alia Europe's contribution to climate change.

Alongside that - now that the flood damage has exceeded the magic £2 billion qualifying threshold, there will be a high profile gesture from the EU commission, as it pays a very small amount to the UK from the EU "solidarity fund" to cover some of the costs incurred by public authorities in dealing with the flood clean-up.

This will be paraded as an example of the benefits of EU membership (we get to see a fraction of our money returned to us), on top of which Cameron will be told that, in order to prevent future "extreme events", he should support the very treaty he is putting at risk. Essentially, the pitch will be, "support the treaty to save the planet". Cameron, having put his weight behind the EU on this issue, will find it very difficult to counter the attack.

The phrase, "hoist with his own petard" comes to mind.