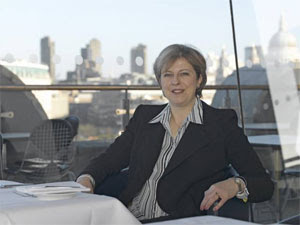 Painful though it may be, we are actually going to write something complimentary about the Tories and about a figure who would not normally cross our radar, Theresa May, the shadow leader of the House of Commons.

Amazingly, she has just announced her Party proposals for "proper Westminster scrutiny of EU legislation", having declared that our system of scrutinising EU laws is woefully inadequate.

She offers ten proposals which are no substitute for a complete withdrawal from the EU but, for as long as we remain in the evil empire, represent a significant improvement on the existing system. These are:

1. A statutory Scrutiny Reserve, so that ministers gain Parliamentary approval before negotiating in the Council of Ministers – accepting the need, where appropriate, for ministers to be given flexibility in negotiations.

2. A fixed timetable for the government to notify the European Scrutiny Committee of new proposals.

3. New powers for the Scrutiny Committee to force a debate and vote, in the House of Commons, if it doesn't agree with government motions.

4. New powers for MPs to challenge the Scrutiny Committee and force a debate on the Floor of the House.

6. An end to the failed European standing committee system.

7. Time allocated to European issues to be debated on the Floor of the House, through Oral Parliamentary Questions to the Minister for Europe.

9. European politicians and officials to be invited to give evidence to the Scrutiny Committee.

10. A new process for intergovernmental negotiations and new European treaties: a committee for new treaties, Prime Ministerial statements before as well as after IGCs, and referendums on treaties that transfer further powers from Britain to the EU.

The proposals to abandon the European standing committees are particularly good as, for – as we have remarked previously - too many vitally important pieces of legislation are debated in the innermost recesses of the House, ignored by all and sundry. Debating them on the floor of the House would, at least, get some more attention.

The commitment, albeit qualified, to referendums on treaties, is also to be applauded and the requirement for prime ministers to give statements before as well as after IGCs is also to be welcomed.

What would not change, however, will be the sheer weight of legislation pouring out of Brussels and it is that very volume which defeats attempts at proper scrutiny. There is just too much, of such very great complexity, that it is beyond the capability of any system to keep up with it.

That apart, what May seems to have done is make an honest attempt to make an unworkable system a little bit better. For that, we must give credit where it is due.