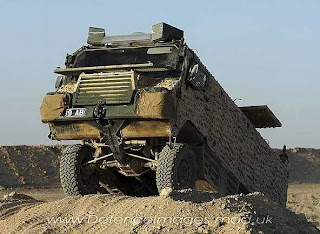 We are not going to say, "told you so", because we do not have enough details. But this report is disturbing.

It recounts that, yesterday a British soldier was killed and two others injured by a roadside bomb in southern Afghanistan, while riding in a Pinzgauer Vector. The soldier, from the 1st Battalion The Royal Anglian Regiment, died after an attack on a patrol in the outskirts of Sangin in Helmand province early in the morning.

This dangerously inadequate vehicle has been the subject of many posts on this blog, for instance, here and here. The question must be asked, therefore, as to whether a better vehicle, such as the Mastiff or RG-31 (or even a Bushmaster: this Dutch example, pictured below, was hit by an IED last week - none of the crew were harmed), could have prevented this death and injuries. 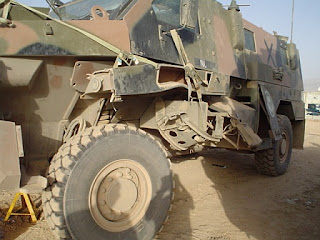 Of course, if we asked the question officially, the MoD would not give us any answers, hiding behind "operational security" as it always does on such occasions. But, if the answer is "yes" (and it is not necessarily so - see here), then I hope the people involved in manufacturing and procuring this vehicle have trouble sleeping. At least they will be alive and whole.

It seems too much to hope for however, that the MoD and the Army will begin to understand that the currency of counter-insurgency is soldiers' deaths. The more the casualty rate builds, the harder it is to sustain operations in the face of mounting public opposition. Inevitably, some deaths are unavoidable but the emphasis should be on preventing avoidable deaths. Given that this vehicle is so ill-protected, the presumption must be that this was an avoidable death.

This, we cannot afford.