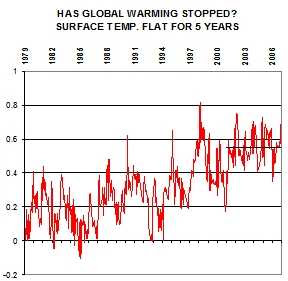 A new scientific study concludes that changes in the Sun's output cannot be causing modern-day climate change, says the BBC.

That, with similar sentiments expressed by hundreds of other media organs, is the view of the paper produced by professor Mike Lockwood and Claus Froehlich and published in the current edition of the Proceedings of the Royal Society.

However, the glee with which the media have simultaneously piled in to "debunk" the solar radiation theory suggests something of a co-ordinated attempt to attack the climate sceptics, the particular target the TV documentary The Great Global Warming Swindle , broadcast on TV's Channel Four earlier this year, which featured the solar warming argument.

Lockwood's thesis is that, in the last 20 years, the Sun's output has declined yet temperatures on Earth have risen. Intriguingly, while he also concedes that cosmic rays may have affected climate in the past, this is no longer having any impact on the present. "It might even have had a significant effect on pre-industrial climate," he says, "but you cannot apply it to what we're seeing now, because we're in a completely different ball game."

And, as always, there is but one agenda, to reinforce the "consensus" and close down discussion. Thus, declares Lockwood, "This should settle the debate".

However, while Lockwood uses surface temperatures as the basis for his comparisons, these data are, at best equivocal, as they are affected by factors unrelated to climate variations (not least the "heat island" effect). Even then, as the top graph shows, data from the Climatic Research Unit, University of East Anglia, charted from 1979 until October 2006 demonstrate that global temperatures have flattened out over the past five years. 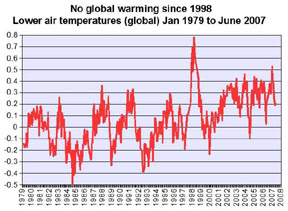 The more accurate NASA satellite data, however, are even more striking. These, recording lower air temperatures, show that there has been no warming since the global peak in 1998. Far from having risen, global temperatures have in fact stabilised.

As science writer, John Ray, points out, since the effects of reduced solar radiation may be lagged, the influence concerned may take some time to show up. One reason for this, he argues, is the vast reservoir of heat, CO2 and much else that girdles the earth: the ocean. It takes some time for a surface temperature variation to show up in the amount of heat stored in the ocean.

His view is that, when the recent drop in solar output works its way through all the systems - such as the ocean - we might expect global cooling. It is cooling, he suggests, that the solar data suggest as imminent, not warming.

Far from "settling the debate", therefore, all Lockwood has done is poke a stick in a hornets' nest. And time is on the sceptics' side. If what we are seeing is the emergence of a cooling trend, the next ten years will be crucial. At the end of the next decade, the evidence will be unarguable.

What fun it will be to see the warmists wriggle and squirm.