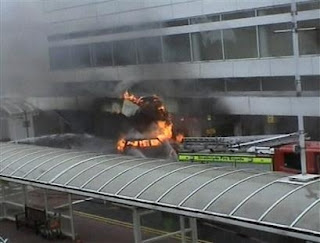 That two of the terrorists apprehended in the wake of the current round of attacks are, respectively a man described as a "brilliant neurosurgeon" and a junior doctor, the one from Jordan and the other from Iraq, is somehow more incomprehensible than the earlier bombing by disaffected British Muslim youths.

Both were educated men and, together with their co-conspirators – also doctors - with good incomes and everything to live for. Yet they chose a path of nihilism executed, one has to say, with a fair degree of incompetence.

What this incident does though – arguably - is underline the nature of the mindset which fuels the jihadists and the futility of even attempting to negotiate or treat with them. Furthermore, this also defines more clearly the nature of the threat. It is not the poverty-stricken disaffected but a conspiracy of international terrorists who are determined only to wreak death and destruction on the innocent.

To that, there can only one sane response – to take the terrorists out of circulation. Where the security situation permits, that means locking them up but, where there are lawless environments, such as in Iraq and Afghanistan, the only option is to root them out and kill them, using military force.

Add to that a third element, which should be self-evident – that the threat is not only international but of a huge scale. To deal with it, therefore, in all its manifestations, would seem to suggest that we must focus on it and apply maximum resources and capabilities to defeating it. In effect, since we are war, we should be on a wartime footing, with everything that that implies.

It was this thinking that inspired – in part – my post on Sunday where, in apparent contradiction of my thesis here, I argued that we should withdraw our troops from Iraq and Afghanistan.

That, in essence, was a cri de coeur, a reaction to one phenomenon which, on the face of it, is preventing us from addressing the real and present threat, sapping our energies and hampering our response. For want of a better term, I shall call it "futuritis". Our readers may have a better name for it.

To develop this thesis, it is instructive to refer to a recent press release from the European Defence Agency, which records agreement on yet another "roadmap and a timetable" designed, in the words of the release:

...to produce a comprehensive Capability Development Plan (CDP), which will help EU governments identify the key capability areas that they must work together to develop to meet the security threats of the future, and to target possible areas for collaboration to deliver the necessary capabilities.

The key word here, of course, is "future". We see this enormous intellectual and physical effort directed to meet "the security threats of the future". Yet, this is the same group of nations that, by and large, have ducked out of the fight in Iraq. It is the same group of nations which have been extremely parsimonious in providing assets for the war in Afghanistan, to an extent that European nations were not even prepared to supply casevac helicopters to aid the nations who were delivering fighting troops.

This is exactly the same phenomenon which I identified in my unnamed RAF officer - against whom I railed in my earlier piece – who told me that the Services cannot afford to focus on the current wars in Afghanistan and Iraq as that would leave them unprepared to fight future wars.

That is not to say that the man – and all his fellow travellers – do not have a point. When, in the 1980s the whole of the Western defence establishments were focused on the Soviet threat, there were small voices warning of the future threat of Islamic fundamentalism, many of whom were entirely ignored. We would expect, therefore, our planners to keep an eye on future threats, while dealing with those immediately to hand – and applaud them for so doing.

But this is different. Beyond the global threat of Islamic fundamentalism, it is incredibly difficult to visualise a threat of the same magnitude or severity, and certainly not one which requires the ranks of gleaming, hi-tech toys which the generals are determined their nations should buy. They are building their armies for the future, but have no real idea of what they will be used for, against whom and where.

On the other hand, they seem to be in denial about the existing war. There may be many reasons for this, not least that counter-insurgency and like activities, are dirty, messy and, more importantly, do not conform with the average soldier's vision of a "real" war.

Thus there seems to be a collective determination to avoid thinking about what is, ignoring the real and present danger, in order to focus on the much more entertaining and rewarding task of writing "Capability Development Plans", to deal with hypothetical wars of the future, against mythical foes in far off lands which, as yet, do not exist.

So do we lose this war, but hey! We can always win the next one!