What's French for "watch this space"? 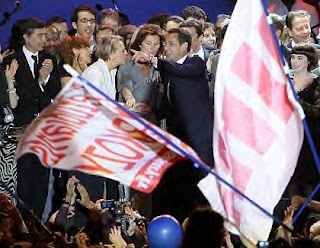 No need to take yesterday’s carbecues in France too seriously though they were extensive with hundreds of people arrested, dozens hurt, mostly police officers and even the odd "peaceful protest" against Sarkozy's election. Some of these people have a very odd idea of what democracy means but that view is shared by all those Democrats who see the Bush administration as somehow illegitimate and people who cannot accept that yes, indeed, Tony Blair is, for the moment and for the last ten years, the elected Prime Minister of this country.

I particularly like the anarchists shouting that "the people" will have Sarkozy's hide. Ahem, the people voted for him in large numbers. And how many votes do the Anarchist parties get? 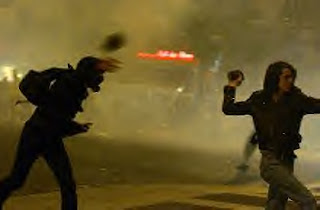 If there is going to be real trouble in France, it will come from the usual sources – the unions. Those are a good deal more difficult to deal with than hooligans on the outskirts of cities. Not that the new President and the Assemblée that will be elected in June is not going to have problems with a number of the communities on those outskirts but, there can be no question that economic reforms must come first. If successful, they might solve some, though not all, of the problems that cause the endless car-burning and other attacks.

Obviously, Sarkozy is feeling his way but he has made a few statements that are of interest. This is what Bloomberg says:

Nicolas Sarkozy claimed a mandate for change after his election as French president, pledging to unify the country as he began promoting a program of tax cuts, tougher prison sentences and tighter immigration rules.

"The people of France have chosen to break with their ideas, habits and behavior of the past," Sarkozy, 52, said late yesterday in a victory speech in Paris after congratulating his Socialist opponent, Segolene Royal. "I will restore the value of work, authority, morals, respect, and merit. I'll restore national pride and national identity."

Well, it takes more than one person to restore national pride and national identity but one can forgive Sarkozy for feeling somewhat euphoric. (Incidentally, one wonders how Chirac feels. Sarkozy must be the person to whom he least wanted to hand over the keys to the Presidential Palace.)

Sarkozy’s proposed reforms are likely to cause discontent among the trade unions:

He has said he would push through a law in September requiring a minimum level of service by transport workers -- a move labor leader say weakens their right to strike -- unless unions negotiate a deal by the end of summer. An impasse may lead to strikes that could set the tone for the rest of his presidency.

The proposed tax reforms will, if put through, push France ahead several European countries, including Britain.

Provided his party wins June parliamentary elections, lawmakers' first task will be to vote on Sarkozy's 10 billion euro plan ($14 billion) to scrap payroll charges and income taxes on overtime hours. It would also eliminate inheritance taxes for all but the richest 5 or 10 percent and introduce a tax deduction for mortgage-interest payments.

It is a little less clear what his foreign policy is likely to be. He is known as being pro-American and anxious to repair the damage in the western alliance caused by his predecessor and Chancellor Schröder. (Soros may well have missed his chance.) He has also said that he wanted to strengthen the European Union and ensure France retained or regained her leading position. Well, whatever.

What I found particularly interesting in some of the coverage is that Sarkozy, being right-wing and friendly towards Bush, has also been tarred with the "divisive" label. The New York Times headlined its article yesterday: "Sarkozy Wins the Chance to Prove His Critics Wrong". I imagine a number of people hope that he will prove his supporters right.

Der Spiegel talked of France lurching to the right and Sarkozy possibly opening up social fissures. To be fair, they acknowledged that voting for him the electorate voted for change, especially economic and social change. Then the article asked the very pertinent question as to what Sarko's role was in all the years of "chiraquerie", the period of stagnation. So far, nobody has bothered to ask that as Sarkozy has somehow made it sound that none of it had anything to do with him. 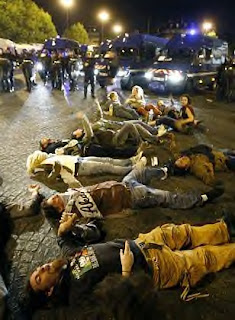 Well, Sarkozy is a divisive politician but that is not necessarily a bad thing – anyone who wants to achieve anything in politics, particularly if that involves heavy duty reforms is going to alienate people. And, yes, nearly half cast their vote for his opponent. But more than half went for him and that is what democracy is about. There are many close calls but they do not matter.

Ségolène Royal gracefully acknowledged her defeat, behaving a good deal better than she did in that last hysterical outburst, and merely promised that the left will not regroup and retrench, possibly reaching out yet again to some of the people of the centre. Well, that is their privilege in politics. 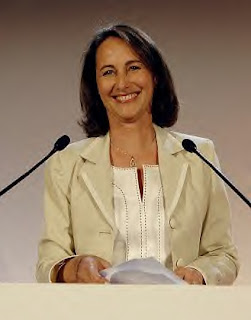 For the last time or, at least, for some time to come, we have to ask ourselves why she lost, breaking the political rule that says women who are in a serious position to be elected, win the first time round.

A number of explanations can be proffered. The most straightforward one is French politics, which is possibly more misogynistic than most others. It is certainly true on the left, but it is usually true on the left and Royal was unusual in that she emerged as a Socialist candidate. Mostly women who stand a good chance of winning emerge on the right.

Then there was her unfortunate lack of clear ideas or policies. Her participatory democracy dissolved as anyone could have predicted into well-meaning waffle. Unlike women like Thatcher or Merkel, Royal actually represented the status quo, which had clearly failed. It was Sarkozy who represented something new.

Finally, I would like to suggest that Royal played a little too much on being a woman candidate. By and large, with the exception of feminist philosophers, some of whom have described Royal as being inevitable (I bet she feels foolish now), voters do not like that. Especially, women voters do not like that. Furthermore, Sarkozy was very smart. Unlike the dinosaurs in the Socialist Party who asked questions like "who will look after the children", he always very carefully refused to attack her personally or suggest that she was in any way less than absolutely brilliant. Even Robert Harneis, Royal's admiring biographer, acknowledged that Sarkozy's attitude pulled the rug from under her feet.

So, that's all over. France has a new president, a man who has risen entirely by his own efforts, a man who is known as a real toughie. What is the French for "watch this space"?