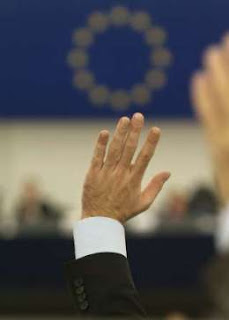 In a far distant land called Brussels, with no equivalent anywhere else on the planet, a certain member of the EU Parliament has been complaining consistently about the habit of his fellows to vote in their chamber mainly by a show of hands.

This is Graham Booth, one of the remaining UKIP MEPs, who avers that the well documented inaccuracies of the "show of hands" voting system in the European Parliament led him to make a call, last year, for full electronic voting, since the equipment is already in situ. That request, he says, was dismissed out of hand.

Yesterday, in Brussels though, he triumphantly proclaimed that his call for electronic voting had been fully justified, when the most outrageous error to date was exposed. During voting on a report by Mr. Kaczmarek on "EU partnership in the Horn of Africa", amendment No. 5 was declared "Rejected" by the chairman Vidal Quadras, having assessed the show of hands "for" and "against" the amendment.

An electronic check then revealed that it had actually been APPROVED by no less than 567 votes to 17 (with 18 abstentions). Quadras blamed the MEPs for "not holding their hands high enough".