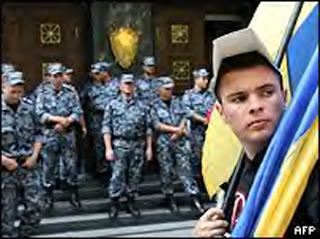 Those who supported the people of Ukraine in their desire to have free and fair elections are now deeply disappointed. Those, on the other hand, who pronounced that Russia has every right to impose its nominee as president, by whatever means it sees fit, are rejoicing.

The situation is messy. From various sources, some Russian some English one can gather the following scenario.

In Kiev (for some reason everyone has gone back to the Russian rather than Ukrainian spelling) there were meetings of Yanukovich supporters. The two rivals for power, President Yuschenko and Prime Minister Yanukovich met to negotiate yesterday and that led to nothing. They were supposed to meet again today and eventually did so, two hours after they were supposed to. The outcome of those talks remains unknown.

Meanwhile, there is the saga of the Ministry of Interior troops, taken over by President Yushchenko because the Ministry itself is loyal to Yanukovich. Today he ordered them to march from various sub-regions to Kiev, though it was hastily announced that they would not be armed.

The sacked Prosecutor-General and the Ministry spokesman described the march as illegal and unnecessary, adding that there was no trouble in Kiev and the troops, with or without arms, were not needed there.

The latest news seems to be that the troops have been stopped before they entered Kiev. That, of course, still leaves open the question of the troops that are actually stationed in the capital. Were they marching anywhere in particular?

Meanwhile, as predicted here, Javier Solana, the Lord High Executioner of the common foreign policy, has been flapping. According to the BBC Russian Service, Prime Minister Yanukovich telephoned him yesterday and Solana expressed the view that force must not be used to sort out the crisis. Also, he added, there should be a reform of the electoral system to ensure that the parliamentary elections are conducted in a transparent fashion. Does he know something the rest of us do not yet or is he simply recycling his statements from the last big crisis?