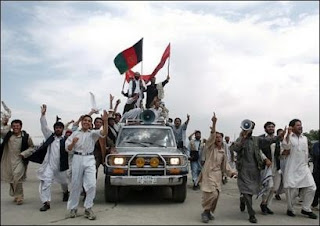 According to The Times, detachments of the Afghan Army – including heavy artillery - are lined up on the border in the district of 'Ali Kheyl in eastern Afghanistan, ready to take on the Pakistani Army over a border dispute, backed by thousands of Afghanis have been demonstrating against Pakistan (pictured).

The periodical Turkish Weekly reports that there have already been serious armed clashes, in which 13 Afghanis have been killed.

This is on top of the growing political crisis in Pakistan itself, as president Pervez Musharraf – a vital ally in the war on terror - is struggling to survive after clashes in Karachi, Pakistan's largest city, left more than 40 people dead following demonstrations last week. Meanwhile, British, Canadian, US and other Nato troops are battling it out with the Taliban, supposedly in order to bring peace and stability to the region.

Sometimes, you wonder whether the world is truly going mad.