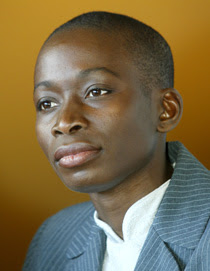 Thanks to the excellent blog, Booker Rising, I came across this story.

Nyanko Sabuni is Burundi born centre right politician in Sweden and is the Minister for Integration and Gender Equality. She seems to be taking her job very seriously and has launched a fight against honour killings in Sweden. (When is someone going to do that in Britain, I should like to know.)

Her speech on the subject is well worth reading. Here are the crucial paragraphs:

Violence against women is not limited to specific countries and regions, but is a world-wide problem. Nevertheless, violence against women is sometimes rooted in local cultural habits and beliefs, such as the notion that girls and women are the bearer of men's or families' honour. It is sometimes also related to religious doctrines, including doctrines about the position of women in society. And it is often the case that a clash between on the one hand a traditional way of life and on the other hand urbanisation and migration worsens the problem.

This does not, however, mean that culture or religion is responsible for the violence. The perpetrator is always responsible. Cultural mores and religious teachings can be interpreted and applied in different ways.

All forms of violence against girls and women, including violence in the name of honor, constitute criminal offences. States have an obligation to exercise due diligence to prevent and to investigate such crimes, and to ensure that the perpetrators do not enjoy impunity. States also have an obligation to provide protection for the victims. Not doing so is a violation of human rights.

All people regardless of sex, ethnicity, sexual orientation, age, disability or cultural and religious traditions are of equal value, and must be able to enjoy human rights. All people should have equal opportunities in all areas of society.

When girls and women live in the fear of violence, are restricted from setting the standards of their own lives and prevented from developing into free and independent adults, it is impossible for them to fully enjoy human rights.

As it happens, the UN at whose event she made the speech, is unlikely to do anything much about the problem, being far more concerned with lambasting the United States and Israel.

She is a courageous lady. The Muslim "community" or, to be quite precise, its self-appointed spokesmen, have already gone into an attack, accusing her of racism and, no doubt, Islamophobia. Whenever people say that one wonders whether they are listening to themselves. If you oppose a campaign against honour killings because it is racist and anti-Muslim, you are, in effect, admitting that only certain groups indulge in it. Is that really sensible?

Ayyan Hirsi Ali said very similar things and was, for her pains, run out of Netherlands. Even in Washington DC she has to have constant protection. These people have real courage.
Posted by Helen at 17:01