There is always one 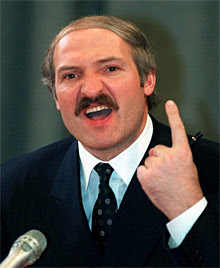 At any given time there is one particular extremely unpleasant dictatorship around that is the flavour of the month in the negative sense. It is always being criticized by governments and, above all, transnational organizations. The idea is, one assumes, to be able to respond to those critics who point out unpleasant and inconvenient truths: while every tranzi organization worth its salt and the huge amounts of money poured into it produces many reports about the misdeeds (real or imagined) of Israel and the United States (it used to be the UK as well when we had IRA terrorists in prison), the real bloodthirsty dictators are welcomed with open arms.

The flavour of the month is Belarus. Don't get me wrong. It is a terribly run country with President Lukashenka doing everything he can to destroy free political life, fee media and free economic activity. Whether that makes him worse than, let us say for the sake of argumetn, President Putin is a moot point.

According to Der Spiegel Belarus had been headed off from a seemingly certain position on the UN Human Rights Commission during the election of 14 new members voted for in the General Assembly.

For reasons that are not entirely clear, the East European group submitted only two nominations for the two positions: Slovenia and Belarus. Various human rights groups then campaigned to have another candidate, Bosnia and Herzegovina, whose human rights record is not too bad at the moment. Slovenia won and the other two had a run-off. Bosnia won and Belarus is out, which allows the UN preen itself after the curious incident of Zimbabwe becoming the chairman of the Commission on Sustainable Development.

There is only one problem. Well, more than one, actually. The other members of the UN Human Rights Commission elected this week: Angola, Bolivia, Egypt, India, Indonesia, Italy, Madagascar, the Netherlands, Nicaragua, the Philippines, Qatar, and South Africa.

Are we to assume that countries like Angola, Egypt or Qatar have human rights records that qualify them for the UNHRC?