Bulgarians have groundhog days as well 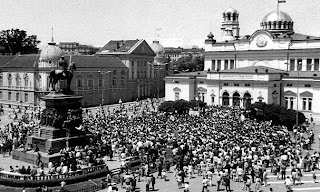 One is so used to politicians lying that it is scarcely news, and when the EU does it, the only real surprise is that anyone bothers to report it at all.

Nevertheless, the IHT managed to find a little bit of space for the latest example, this one on Bulgaria which, to no one's surprise at all, is mired in a major corruption scandal.

The EU angle stems from last year – almost to the day – when the final go-ahead for Bulgaria’s entry to the community was being mooted. At that point, the ongoing failure of the state to deal with a corrupt administration was being cited as a bar to entry.

Then, in the way of things, this suddenly ceased to be a problem and Bulgaria came sailing in to the ranks of the EU, with nothing more said.

Now, as Bulgaria prepares to vote in its first Euro-elections, to pick its MEPs for the "toy" parliament, the IHT tells us that the campaign has been eclipsed by the country's biggest corruption scandal to date. And that means it must be pretty big.

At the centre is the Bulgarian Socialist Party - the successor to the Bulgarian Communist Party – and leader of the ruling coalition. Its economy and energy minister, Rumen Ovcharov and he is publicly accused by the director of the National Investigative Service of interfering in a high-level corruption investigation to protect a friend.

Says Boyko Borisov, the mayor of Sofia, "People are truly disappointed by the political class," adding that the case showed that Bulgaria was accepted into the EU only out of sympathy. Membership should have been delayed until the country could truly meet the criteria, he says.

"People expected that the EU would have much more serious control over Bulgaria," Borisov said. "Unfortunately they have seen that things have not got better, they have got even worse."

Mind you, we don’t think our Borisov has quite got the hang of the EU yet. Did he really, truly think things would get better?