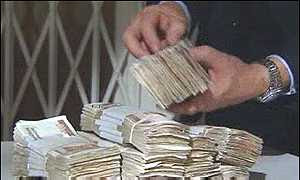 VAT fraud cost the UK Treasury £4.75bn in 2005-06 and is estimated to be worth €250bn (£170bn) annually across the EU as a whole, says a House of Lords Committee Report. These are such staggering figures that they defy human comprehension.

Those who are old enough, however, will remember the Great Train Robbery - committed on 8 August 1963. A cool £2.3 million was stolen - £40 million in today's money – and the publicity was huge, reaching down even to the present, where the crime is part of our national folklore.

For sure, more recently, the UK government has got to grips with some of the more obvious scams – involving computer chips and mobile telephones – through increased enforcement and tightening procedures. And it has done deals with the EU to change the part of the system applicable to chips and telephones – which we covered here and here.

But the House of Lords argues that these measures are unsustainable. Simply carrying out the checks involves about 1,500 staff, at a cost of £95m a year, with some supply chains under scrutiny involving up to 600 companies. And it carries the danger of withholding money from legitimate, smaller, importers and traders, possibly pushing some to the brink of bankruptcy.

Furthermore, the peers warn that the system change will simply shift the fraud from goods like mobile phones to others instead - such as cosmetics, precious metals, and computer software. Thus the fraud "will continue to migrate and mutate."

The only way we can get to grips with this fraud, therefore, is to change the VAT system and that – as even the Committee acknowledges – is not going to happen. It is an EU tax, it requires unanimity to change, and the majority of member states are against any fundamental changes.

So, we must continue to suffer the depredations of (largely) organised criminals, who will continue to rip off taxpayers (us) to the tune of billions each year. And because, politically, there is absolutely nothing we can do about it, the media will note it as a curiosity (those that bother to report it) and go back to sleep while, from the Opposition, we will hear nothing.

That is the level to which we have been driven by our membership of the EU. Neutralised and emasculated, we can only tut-tut and shake our heads in dismay. It is truly bizarre.