Well, what a surprise! 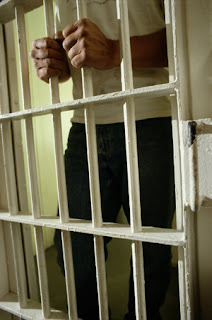 This is how it describes the possible release of "up to 3,000 foreign criminals" into a population approaching 60 million - criminals, it says, who will be released from prison on to Britain's streets (after having served their sentences) without any attempt made to deport them.

The real issue, however, is the European Union, or more specifically, Directive 2004/38/EC "on the right of citizens of the Union and their family members to move and reside freely within the territory of the Member States", which came into force just over a year ago – an event we recorded on this blog.

In order to ensure compliance, an internal note has been sent to British probation staff, which the paper claims, says as few as 250 convicts from other European countries will face even preliminary deportation proceedings each year. The problem, according to the note, is the Directive, which prohibits member states from using serious crimes, or wanting to set a "deterrent" to other foreign nationals, as longer sufficient grounds for deportation.

Thus, the vast bulk of the estimated 3,300 European criminals released from jail each year - including burglars, thieves and muggers - will simply walk free.

Such is the Mail's grasp of EU issues, that even though this was discussed on this blog, over a year ago, the paper is able to declare that: "The revelation is a huge embarrassment to the Prime Minister and the man he charged with fixing the Home Office, John Reid."

In the wake of the foreign prisoner scandal last year, the paper tells us, Tony Blair promised: "It is now time that anybody who is convicted of an imprisonable offence and who is a foreign national is deported."

Instead of addressing the real issue, therefore, this is being dealt with in terms of personality politics. Shadow home secretary David Davis is cited, saying: "Yet again we see that the public will be put at risk as a direct result of John Reid's failure. He spun he had a deal to remove these offenders but the rhetoric has not matched the action."

Yet this is not Reid's "failure". It is an inevitable consequence of British membership of the European Union, this government acceptance of the Directive and Parliament's approval of it. That we cannot now deport any but a tiny fraction of offenders from other EU member states was and is an entirely predictable result.

But, as long as Boy Dave doesn't do "Europe", Davis can't possibly blame our membership of the EU. If he was in office, he would have to do exactly the same thing. Isn't that a surprise!