The silence of the right 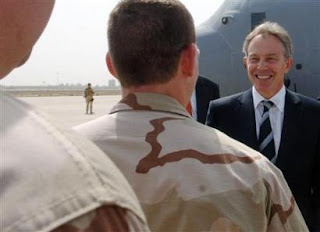 On the day that prime minister for not very much longer, Tony Blair, flew in to Iraq to bid his last farewells to prime minister Nouri al-Maliki and then British troops, The Guardian has offered an eye witness account of the situation in Basra.

The piece itself is headed: "'Welcome to Tehran' - how Iran took control of Basra", with the strap, "Britain has failed to stop southern Iraq falling into grip of militias in Basra."

It opens with an account of two new police SUVs driving onto a dusty, rubbish-strewn football pitch where a group of children were playing. Three men get out of one of the cars and, while one stands guard with a Kalashnikov, the other two fire off a pair of "Katyusha rockets", targeted at the British-held Basra palace.

As the report develops, the author tells us that different police factions are loyal only to the (Iranian-backed) militias. As to the city, he writes, "It's calm not because it's under the control of the police, but because all the militias have interests and they want to maintain the status quo. The moment their interests are under threat the whole city can burn."

That the police are heavily infiltrated by the militias, we did actually know. But the picture painted here is unremittingly grim – with the strong impression given that the militias have total control, poised to take over at any time of their choosing, leaving the city, effectively, under Iranian occupation.

What gives the report is apparent authority is that it is written by an Iraq-born journalist with a by-line of Basra. But, as always with reporting from Iraq, appearances can be deceptive. The author is in fact Ghaith Abdul-Ahad. He styles himself as a free-lance journalist, but writes often for The Guardian and other left-wing papers, not least the New York Times.

And, despite the Basra by-line, he is actually based in Lebanon, and reports on issues all over the Middle East. Strangely, he seems to be able to mix freely with Sunni and Shia and trades on his reputation as one of the last unembedded journalists to work in insurgent-held Fallujah before the American assault on that city in April 2004. For that, and other work, he subsequently gained the 2005 Amnesty International Media Award.

As to the report itself, the patina of authenticity is just that – skin deep. It is actually so biased that it would be laughable, if it had not also appeared so superficially plausible. The trouble is that the defects are almost entirely those of omission. 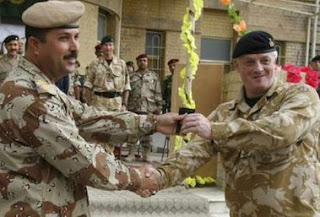 While we can accept, for instance, the dominant role of the militias in Basra, no account is or can be complete without an account of the "third force", not the British and coalition forces, who are holding a very rough sort of equilibrium, but the Iraqi Army and, in particular, the 10th Division, based in Basra but with elements fighting alongside the Americans in Baghdad.

While the Division is still finding its feet, reports of its activities have been remarkably (and surprisingly) favourable, and no one would suggest that it is in any way under the control of the militias. In fact, the impression is that it is loyal to the government and that it has some support amongst the tribal chiefs which hold the balance of power and are by no means happy about what they regard as the interference of Iran. It is generally felt, therefore, that should the militias decide to make a move, the Army – with the support of the coalition forces – would try to hold them off and restore order.

That is not to say that the Army would succeed or that, if the pressure got too great, it would not crumble. But in any complete (and honest) report of the Basra situation, one would expect to see an evaluation of the role and effect of the Iraqi Army and, for that matter, the effect of the more aggressive tactics of the British Army and other coalition forces.

Nevertheless, as we remarked in an earlier piece citing Gerd Schroeder, it would be wrong to expect any balance through unbiased reporting. "This will be reached," wrote Schroeder, "by the left and right pulling against each other to reach equilibrium."

But, while the left-wing Guardian is happy to give its space to one view, we seem drastically short of countervailing reporting from the right. By its silence, it is ceding the battle.