The news is out 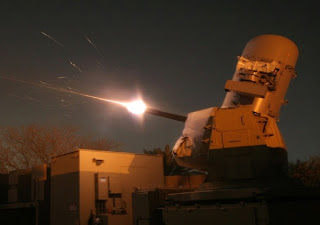 According to Jane's Weekly (subscription only), the UK is to deploy a US-sourced counter-rocket, artillery and mortar (C-RAM) system to protect UK forces in southern Iraq. This was announced by the magazine on 25 May, after the news had been "leaked" by a senior RAF officer at a defence conference in London.

It says a great deal for the "intelligence" on which the UK's premier defence journal relies that we published this same news on this blog on 30 April - nearly a month earlier – when it was also referred to by Tory MP Ann Winterton in her speech in Parliament.

From Jane's, however, we understand that the equipment is to be installed in Basra by the end of the month and, to meet the ambitious timetable, the C-RAM installations have been leased from the US, pending conversion of former Royal Naval equipment for more permanent installation.

This extremely welcome development is yet another indicator of the commitment of the British government to a continued presence in Iraq, forming as it does part of a growing package of measures designed to deal with the insurgency there.

Needless to say, this news has not been picked up by the MSM, most of which is still locked into the narrative that Gordon Brown is determined to speed up the timetable for the withdrawal of British forces from Iraq.