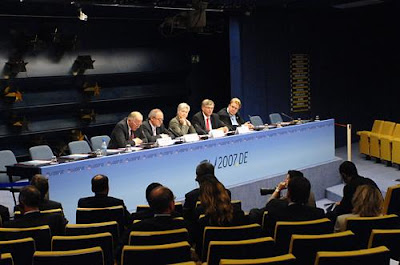 Well, while attention is focused on attempts to re-introduce the EU constitution, with some Eurosceptics wailing and gnashing their teeth, bold as you like, the "colleagues" went ahead yesterday with implementing a key part of the supposedly defunct EU constitution – the European Space Policy.

Fronting the announcement after the fourth Space Council, commission vice-president Günter Verheugen knew exactly what he was doing. "Without the European Space Policy," he said, "Europe could become irrelevant." Waxing lyrical, he then declared – to a near deserted press conference (pictured):

With this Resolution on the European Space Policy, we intend to live up to Europe's global leadership aspirations in important industrial and research areas, which will provide growth and jobs for the future. Moreover, space has always been a source of inspiration which helps people to think outside and beyond the limits and to innovate. Today's proposal marks a milestone, to ensure that Europe does not miss out on the important opportunities that space technology offers.

Maria Van Der Hoeven, the Dutch minister of economic affairs and current Chair of the European Space Council – the EU's partner in the Space Policy, was even more effusive: "The ESP," she warbled, "provides a strong incentive for better coordination and cooperation in Europe and thus for more value for our public Euros, and will contribute to strengthening the global role of Europe in the space domain through a joint international cooperation strategy."

Meanwhile, DefenseNews picks up on the admission in the 10-page resolution that the European Union nations have finally cast aside the ruse that their space ambitions are purely commercial. In a groundbreaking political resolution, it writes, the union makes a clear reference to defence and security applications in Europe's future space policies.

Noting that space technologies are common between civilian and defense applications, the resolution states that Europe "can, in a user-driven approach, improve coordination between defence and civilian space programs," and will pursue new "synergies in the domain of security."

And all this is agreed by Norway plus sixteen EU countries which include our very own United Kingdom, soon to be led by Mr Gordon Brown. And will Mr Hannan write an impassioned op-ed about this in The Daily Telegraph?