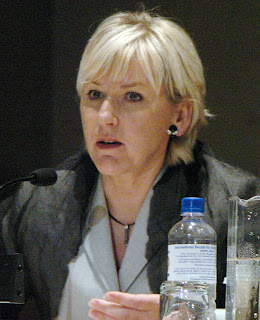 Our readers will possibly recall the story of the fragrant Commissar, Margot Wallström deciding to do a spot of moonlighting from her highly paid job. In March the new leader of the Social Democrats, Mona Sahlin welcomed Margot back into Swedish politics. The fluffy fragrant one was going to be part of a committee that would decide on the party’s foreign and EU policies before the next European elections in 2009 and the next Swedish elections in 2010. (Not that elections matter in the European Union as the legislation just goes on and on according to a multiannual plan.)

Hmmm, we said at the time, how is this possible? Are the Commissars not legally bound to be independent? The UKIP MEP for London, Gerard Batten, put down some written questions in the Toy Parliament. This was Written Question 1717/07:

When members of the Commission take office they swear to ‘perform their duties in complete independence in the general interests of the Communities’, and ‘to refrain from any action incompatible with their duties’.

According to 'The Local', Sweden’s news in English, the new leader of the Social Democrats, Mona Sahlin, announced that EU Commissioner Margot Wallström is to sit on a working group committee to develop the party’s foreign and EU policies.

Mrs Wallström is reported to have said, 'Yes it is (true), but I cannot take on a formal position and sit on a board. But everyone in the Commission is politically active and I think that only enriches our work. I will continue my work with full impartiality'.

1. Is this report accurate? Is Mrs Wallström taking up a position, even part-time, on, or advising, a committee of the Swedish Social Democratic Party?

2. If so, how is this compatible with the undertaking given by Commissioners when they take office?

3. Are any other Commissioners 'active in politics' as alleged by Mrs Wallström? If so, who are they, and what is the nature of their involvement?

Although he asked the question two months ago, the response came only today. To say that it is evasive is to understate matters somewhat. Mr Batten tells me that this is the fate of all his questions. The answers he gets, when he finally receives them give nothing at all. In fact, he sees little point to asking questions in the Toy Parliament unless some particular issue needs to be brought out. 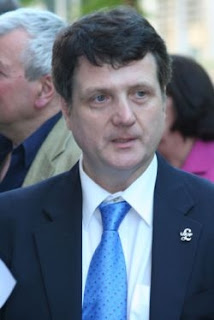 I am encouraging him to go on asking questions. Then we can publicize questions and answers on this blog. Anyway, here is the response, for what it is worth.

Apart from Article 213(2) of the EC Treaty, which provides for the general obligations of independence incumbent on Members of the Commission for the protection of the general interest of the Community, the Code of Conduct for Commission Members contains a number of specific provisions relating to their political activities and their involvement in election campaigns .

Commissioners may be active members of political parties or trade unions, provided that this does not compromise their availability for service in the Commission.

As the Commission has said so often, Members are political men and women. In the performance of their duties they are required to work for the general interest of the Communities and are not allowed to take any instructions, but they are free to attend political meetings provided, of course, that this is not detrimental to their availability at all times as Members of the Commission.

Well, well, well. Let us have a look at Article 213(2) of the EC Treaty, the latter being the fons et origo of all EC/EU legislation.

The Members of the Commission shall, in the general interest of the Community, be completely independent in the performance of their duties.

The Members of the Commission may not, during their term of office, engage in any other occupation, whether gainful or not. When entering upon their duties they shall give a solemn undertaking that, both during and after their term of office, they will respect the obligations arising therefrom and in particular their duty to behave with integrity and discretion as regards the acceptance, after they have ceased to hold office, of certain appointments or benefits. In the event of any breach of these obligations, the Court of Justice may, on application by the Council or the Commission, rule that the Member concerned be, according to the circumstances, either compulsorily retired in accordance with Article 216 or deprived of his right to a pension or other benefits in its stead.

Ahem, what is that at the beginning of the third paragraph?

The Members of the Commission may not, during their term of office, engage in any other occupation, whether gainful or not.

Would that occupation include writing national policies for one’s party back home? “When I use a word,” – said Humpty Dumpty, - “it means what I want it to mean.”