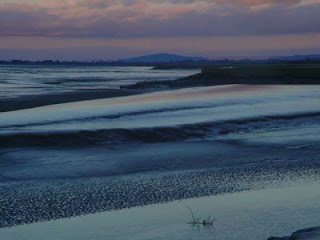 Senior cabinet ministers, we are told by The Independent, are pushing for Britain to be the first nation in the world to get much of its power from the tides, as part of a massive new expansion for renewable energy.

Promoters of this particular bit of madcappery are the environment secretary, David Miliband, welsh secretary Peter Hain and trade and industry secretary Alistair Darling, who want a giant £14bn barrage to be built across the Severn. This, they claim, would generate about five percent of Britain's electricity without producing any greenhouse gases.

Given the slow roll-out of the rest of the renewal energy programme, it would also help meet the recently agreed EU commitment to achieve a 20 percent boost overall in renewable energy use by 2020.

However, not only is that idea sparking fury in with environmental bodies, which say that the barrage would devastate the estuary's wildlife, the biggest obstacle to the scheme is likely to be the European Union.

This is because the Severn estuary is part of the "Natura 2000" network of conservation sites, protected under the Habitats and the Birds Directives, to say nothing of the Water Framework Directives.

There is, however, a mechanism by which the EU can remove the protection, where it can be demonstrated that there is an "overriding public interest" - such as reducing emissions of greenhouse gases.

Nevertheless, all the national environmental bodies, such as the Environment Agency, Natural England and the Countryside Council for Wales are against the scheme, saying that it would "cause irreversible impacts" to the estuary's "internationally important habitats" for birds and other species and its "unique ecology". It will thus be very difficult for the EU to backtrack – especially as the Severn barrage issue had already been rehearsed when the EU approved protection for the estuary.

If the cabinet ministers seek to pursue the scheme, therefore, not only will the government be between a rock and a hard place of the eco greens versus the save the planet greens, so will the EU. But then, it's a hard life at the top where - as anyone will tell you - it's green eats green.