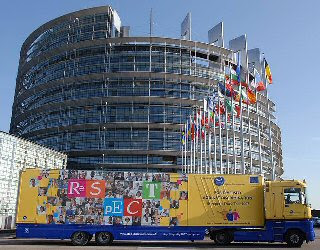 We have to admit that it is not very often that we use Gay News as a source, but this story is irresistible.

The gist is that our wonderful European Union has been spending our hard-earned funds on an "anti-discrimination truck" with further dollops of our money spent on funding a 19 member state tour as part of the EU's "For Diversity: Against Discrimination" information campaign.

This Friday, it was due in Vilnius to celebrate "Equality Day" around the truck, with gay organisations planning to host an action: "We Are for All Colours of Life" as part of the first Lithuanian "gay pride" event.

But, it appears, it is not going to happen. Juozas Imbrasas, the Mayor of Vilnius, has refused to give permission for the truck to make its planned stop. His grounds for refusal were security risks and that events around the truck might cause riots.

The EU commission on the other hand declared that, "The anti-discrimination truck brings a message of tolerance, respect and the need to combat discrimination on the grounds of racial and ethnic origin, age, disability, sexual orientation, religion and belief."

Dare one suggest that there is an element of "disconnect" here?