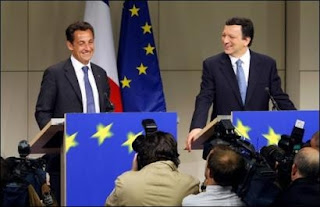 The "little Englander" tendency is rampant in The Daily Telegraph today, in its current commentary on the Sarkozy declaration for a "simplified" EU treaty.

The newspaper has it that Sarkozy has set France on "a collision course with Britain" with his vision for a "simplified treaty" to replace the constitution, with that narrative that Tony Blair had hoped that Mr Sarkozy would join Britain in blocking proposals to remove the national veto on a number of issues at next month's EU summit.

The trouble is, we are told, that Sarkozy has made it clear that for Paris "simplification" does not mean ditching sweeping new EU decision-making powers or rules allowing federalist countries to press ahead with closer political union. The piece then continues:

"We have to be able to move forward," he said in Brussels yesterday. "I am thinking of enhanced co-operation. I am thinking of majority voting, some areas moving from unanimity to majority voting." Mr Sarkozy emphasised that his idea for the new European treaty, to be agreed in outline at the summit, was not merely an amending exercise.

"I talked about a mini-treaty a year ago. I now use the term simplified treaty because I appreciate that mini-treaty might smack of a lack of ambition," he said.

This, of course, is perfectly correct – Sarkozy was talking about the treaty last year and, more recently, in February, when we remarked that Sarkozy had just lobbed a hand grenade into the (European) love-fest, delivering his "European agenda" to a crowd of thousands in Strasbourg. As now, he told the crowd, he would propose a new, simplified treaty that would scrap decision-making by unanimity and create the position of an EU president that would rotate every 2½ years.

That – we wrote then - goes right against the grain of the "treaty-lite" and would involve changes that would require the signing and ratification process to start all over again – a huge can of worms for the "colleagues".

Although, from the "little Englander" perspective of the Telegraph, this creates a problem for Gordon Brown, he is not alone. It also creates problems for the Czechs, the Poles, the Dutch (to say nothing of those who have yet to come out of the woodwork) and even, for France itself. With the scale of changes Sarkozy is proposing, it is hard to see how he could get away without a new referendum – which would be problematical, to say the least.

And therein lies an intriguing possibility – that Sarkozy does not actually want a new treaty. He has far more important fish to fry and could do without the distraction.

However, unlike the British who go at it bull-headed, the ploy is much more subtle – damning it with great praise. By demanding more than is achievable, Sarkozy sabotages the treaty but gets to look "European". His amendments are so unacceptable to some of the more fractious "colleagues" that they ditch the treaty, while he walks away with a Gallic shrug and blames everyone else for the chaos - a classic French tactic.

That is the problem with European politics. Nothing is ever what it seems – three-dimensional chess is a kindergarten game compared with what is going on here. Nothing can be taken at face value and every move and counter-move has a hidden agenda.

Thus, as we wrote in February, it seems to me that those who see the EU constitution as being a done deal are being a little bit premature. The game is very far from over.