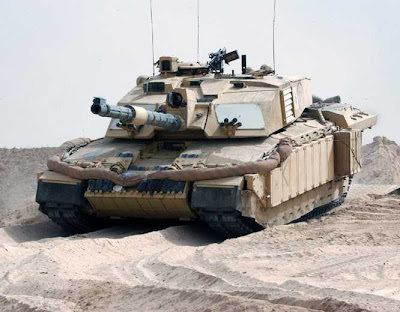 The "toy" today is a Challenger 2 Main Battle Tank, but it comes with a message. When, last week, Tory backbench MP Ann Winterton got her answer on the cost of operating the RAF's Merlin helicopters - a staggering £34,000 per hour – she also got an answer to her question about the operating costs of British Army Challenger tanks.

The question was actually framed in terms of operating these machines in Iraq but the defence minister, Adam Ingram, professed not to know this and instead offered the full capitation cost for the tank based on peacetime usage. This is calculated as £496.15 per kilometre which, in real money, works out at £793.84 per mile. Rounded up, you can call that £800 mile but, given the aggressive environment in Iraq, the real operating cost over there is probably well over £1,000 per mile – and that excludes crew costs.

The question goes to the heart of the debate we have been having on this blog and the one raised by Ann Winterton in her speech in Westminster Hall on 1 May – value for money in defence spending and the need to get more capacity for our expenditure.

What is remarkable, if unsurprising – as we noted at the time – was how the speech was completely ignored by the chattering classes in the media and by the political clever-dicks whose participation in the defence debate amounts to little more than braying the mantras, "overstretch" and "under-resourcing" while, in the Tory domain, noticeably failing to commit a future Conservative government to additional defence spending – not that more money would necessarily be a solution.

On the other hand, what has been surprising – and gratifying – is that the Winterton speech has tapped in to a debate that has been going on, off piste, so to speak, with some intensity, smoking out "players" of remarkable diversity and experience. All have been saying more or less the same thing as Winterton, expressing the same frustration that their message is not being heard.

This further points to the vapidity of the contemporary political discourse, where the "above the line" politicos and their wannabe groupies chatter and preen themselves over their own brilliance – and the media blather about their fatuous goings-on – while serious issues, of real importance, are completely ignored. Rather than participate in such debates, the chattering classes do not even know they are going on.

Turning to the specific issue of this hugely expensive "toy", we have questioned before whether a 65-ton juggernaut of this nature is the right weapon for dealing with a predominately urban-centred insurgency or whether, for most roles, cheaper vehicles might not only suffice but actually do a better job.

This is not a question that can be answered here. The point at issue is that questions such as these should be asked, and the answers should be debated openly, from which better understanding may emerge.

That should apply to the broad sweep of politics and dealing public expenditure. Rather that the top-down, airy statements about the necessity or otherwise of government spending, and the need for more or less of it, real value most often is achieved from bottom-up evaluation. Highly focused questions about the need for and efficacy of different systems, products and programmes can often yield answers which evade the head-in-the-cloud theorists and self-absorbed politicians.

Thus, the process that applies to an evaluation of the role of (and value of deploying) a Challenger tank could – and should – apply equally to NHS spending. Any remotely intelligent worker within the state hospital system could readily point to major areas of savings and it is undoubtedly the case that billions could be saved by tackling the bloated and grossly inefficient NHS procurement system – with no reduction in clinical services provided.

Much the same could be said of the approach to the European Union. As we pointed out in our earlier piece, this construct is popular with our ruling classes because it provides a valuable – and valued – service. Yet, if the costs of what it does provide, and efficacy with which it delivers, were subject to bottom-up scrutiny, it would quickly become evident that there were better and cheaper ways of doing things.

I once tried to explain this approach to a Tory Party policy guru – now a "respected" MP – only to be met with a stare of blank incomprehension and growing impatience.

That does much to explain the policy vacuum within the Conservative Party for, to achieve lasting and effective change, you have to understand the systems you are dealing with, and ask the right questions. But command of detail has never been the forte of our current generation of "leaders", who prefer the sound-bite and clever rhetoric to the discipline of careful analysis.

Thus it is that the world is divided: the "above the line" universe of our gifted rulers and their acolytes, and those of us down in the weeds who are asking questions like: how much does it cost to run a Challenger tank?