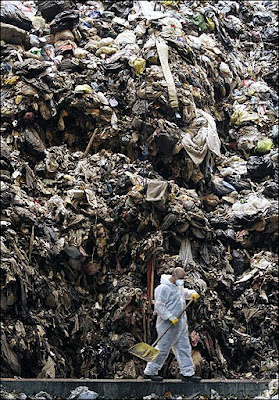 Residents of Naples have begun burning heaps of rubbish that have piled up for more than a week, adding potentially toxic smoke to the foul smell permeating the city. Mounds of rubbish have piled as high as 10 feet in some places and blocked entire streets. Collectors had stopped taking it away because they have nowhere to take it. 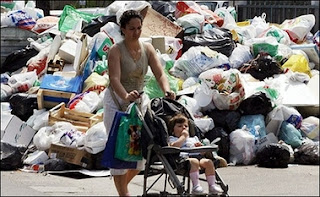 The southern Campania region – home to the luxurious Amalfi Coast but also the slums of Naples – has been plagued by garbage crises in recent years. Dumps fill up, and local communities block efforts to build new ones or create temporary storage sites. In 2004, the garbage crisis prompted weeks of protests.

Fire brigades said they have extinguished more than 150 fires in and around Naples since Sunday, believed set by residents trying to dispose of the trash. The burning of chemicals has added to the already putrid smell of garbage. 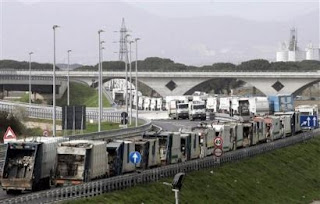 Two treatment centres complained of paralysis and local authorities announced the upcoming closure of a major dump. Outside the Caivano treatment centre some 12 miles from the southern city, about 100 trucks were seen waiting to unload their rubbish. Furthermore, one of the area's two main dumps, in Villaricca north of Naples, is to close on Saturday because it has reached saturation point. 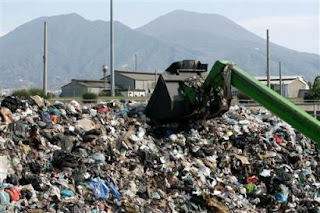 The two-week-old crisis has seen some 15,000 tons of waste accumulate along roads in the southern province, including nearly 3,000 tonnes in Naples itself, because of a logjam at overstretched treatment and recycling centres. The crisis poses a "serious health risk," said a spokeswoman for an extraordinary commission assigned to the longstanding regional problem.

Provincial authorities have sent text messages to Naples area residents asking them not to burn their waste in a bid to avoid the spread of toxic substances such as dioxin.

But, never mind. According to The Independent, the EU has begun to issue significant fines to ease the situation. And these are the people who are telling our government how to run a waste strategy?