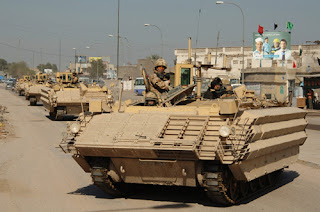 Thank goodness for my co-editor who provides a diet of stories which balance this blog, without which it would end up looking too much like a defence blog – which it is not.

With our name, EU Referendum, however, the emphasis on defence issues, looks at first sight, anomalous, except that there are valid reasons for it.

Firstly, in the annals of European integration, defence – together with foreign policy – has always been one of the key policy areas through which the "colleagues" have sought to progress from economic integration to a "political Europe", on the way to becoming the United States of Europe. Defence, therefore, is and always has been at the forefront of the battle for integration and needs close attention. (It is a measure, incidentally, of the failure of the Eurosceptic movement that it has failed to understand this.)

Secondly, we are looking to our wider brief, which we took on board after the French and Dutch referendums – "To discuss issues related to the UK's position in Europe and the world".

In this context – although you would scarcely know it from the broader political discourse in this country – we are a nation at war, battling on two overseas fronts, Iraq and Afghanistan. Not only does the perception of Britain, by our international friends, allies and foes alike, rest a great deal on how we perform in these wars, but – in the longer term – so does our own perception of ourselves.

While there is a great deal of domestic agitation about early withdrawal – from Iraq, at least – with burgeoning anti-war movements, few people, it seems, have given much thought to the effect of an early withdrawal on our domestic situation, where such withdrawal can be characterised, rightly or wrongly, as a defeat by the forces of militant Islam.

Apart from the hurt to our national psyche, which rightly holds our Armed Forces in great esteem, it would give a massive boost to the morale of the forces of evil within our own society, and quite possibly embolden those many people in the UK who are thinking about committing terrorist acts. Arguably, therefore, in order to prevail on the domestic front, we must win the wars in Iraq and Afghanistan.

That said, one of the most insidious aspects of this society of ours is its failure to acknowledge that we are a nation at war. Whether the politicians at Westminster, the media, or the population at large, all are, in the main, continuing in the "business as usual" mode, with the life and death actions of our Armed Forces in their respective theatres consigned to the margins.

Particularly loathsome in this context is the media (we have almost given up on the Westminster politicians), which seems to treat the conduct of the war as a sideshow, affording the opportunity to paste in copy recounting the "derring do" exploits of "Our Boys", very much in the style of the "Boys' Own" comic of yore.

On the other hand, the manifest – and frequent – failings of the MoD allow the media to treat it as a whipping boy, or as a political football, giving the opportunity to score points off the opposition and generate cheap knocking copy.

In that context, one must turn, briefly, to the Mick Smith article in The Sunday Times yesterday, an analysis of which we posted on the same day. Unusually, the MoD posted a rebuttal on its website and, for once, it was right to do so. The Smith article was a classic example of the cheap shot, and typifies much that is wrong with modern defence journalism (and journalism in general).

In the report to which Smith referred, was in fact an example of the Army actually doing quite well with a difficult situation, one faced by all the Western Armies engaged in the operations in Iraq and Afghanistan, and one to which there are no easy solutions.

More than anything though, the story represented the tendency of the media to go for the "quickie" story, based on one document, or whatever, without any depth, research or analysis. What Smith could have drawn from the document was that the Army is faced with a massive problem of maintaining equipment in aggressive and hostile environments, in what has turned out to be long, drawn-out campaigns.

That, in turn, could have led to a series of articles on whether the Army, and the Armed Forces in general, have the right equipment, and what equipment is needed for these campaigns. But no, Smith had to go for the quick and easy, cheap shot, distorting the context of the report to get his story.

What that points up in turn is the lack of strategic thinking and the lack of intelligent debate in the newspapers – we see more of that in the letters columns. Yet, that is where the media, and especially the defence correspondents, could lead, as did Liddell Hart in the period leading up to the Second World War.

For want of any sensible comment from this source, this blog, for better or worse, has emerged as one of the leading public forums of debate on defence issues - which is seriously worrying. We are by no means experts on the issues involved, yet we seem to be outguessing the experts and raising issues which defence establishments have failed to address.

What this short essay does, therefore - written on a lazy Bank Holiday afternoon when nothing much is happening - is raise several pleas. To our own audience: bear with us. In our view, defence is one of the central political issues of the new millennium and needs all the attention we can give it.

Secondly – a plea to a wider audience that will not be heard – we are at war which, in the longer term, is vital for our survival. It is, as we wrote earlier, far too important to be left to the generals and, unless there is a wider debate as to the nature and conduct of that war, there is a good chance we will not prevail.

Thus, way back in October 2004, we were asking: "Where is the debate?" We're still asking.

The pic, incidentally, courtesy of MoD, shows Bulldog Mk3s in convoy in Iraq. This is one of the particularly inventive improvisations commissioned by the MoD, to deal with the growing intensity of the conflict in Iraq. It is one largely unrecorded by the Media.