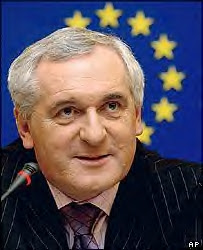 The Teflon Taoiseach is back with a third victory. Well, almost. Fianna Fail has 78 of the 166 seats and a coalition government will be formed after a certain amount of tough negotiation. Whether it will be any more stable than other coalition governments remains to be seen.

The results are interesting. Fine Gael has 51 seats, 18 up; the Labour Party has 20 and the Greens managed only 6, which is not altogether surprising in an election that was all about the economy. Sinn Fein has dropped from 5 to 4 seats, losing Dublin Central; the Progressive Democrats, the most likely partner in the coalition is down to 2 seats; and there are a few independents.

Fianna Fail’s victory has rather surprised the media and various commentators. Inevitably, one has to wonder whether there are any signs here for Britain.

At first sight, no. Irish politics is so different from British that no lessons could possibly be drawn. A similar turn to the two main parties would leave all others so far out in the cold that they would be forgotten till the next election.

In today’s Daily Telegraph, Dean Godson, whose knowledge of Irish and Ulster politics is among the best, says otherwise He thinks that there are certain lessons for British politicians to be drawn and they may not be the ones the Boy-King wants to hear as he enmires himself deeper and deeper in the schools row of his own making.

Some of Mr Godson’s points I am in agreement with. Others not so much. For instance he calls both hospitals and green issues “quality of life” ones. I know nothing about his private life but for most people medical care is of essence in life. So, if there were arguments about Irish hospitals they were presumably not as strong or as bitter as those in Britain.

Education, according to Mr Godson is not a “quality of life” but an economic issue, of huge significance to the aspiring middle class of Ireland. Can that be translated to the British situation? I think so, but I do not see which party could possibly garner support there.

Green issues, on the other hand, are usually “also rans” for most people unless the economy happens to be doing extraordinarily well. One has to assume that some of Mr Ahern’s popularity must rest on the fact that he has presided over the Irish growth, which is now spluttering a bit. Nevertheless, the voters might feel that the man could carry on as he did before.

Certainly, the alternatives, the left-wing socialist or green anti-growth parties did not manage to achieve the sort of result they were almost certain of.

Sinn Fein’s poor showing indicates that Ireland, despite past support and lip service still being paid to the idea of unification, would like to leave the problems of Northern Ireland somewhere else – Britain, as it happens.

This is rather a set-back for Mr Adams and makes that over-hasty agreement between him and the Rev. Ian Paisley pointless.

In the same way, as Mr Godson, points out:

Third, the reverses inflicted on assorted anti-American and single issue candidates, including those against US military landing rights at Shannon airport, were a sign that the voters want the State to play its full part in the international system - even in neutral Ireland.

Read the whole piece. It gives one furiously to think.

Email ThisBlogThis!Share to TwitterShare to FacebookShare to Pinterest
Labels: Ireland