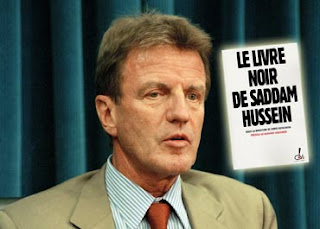 The big news for French politics watchers (yes, I am one of them, sad person that I am) is that President Sarkozy has spread his net quite wide in choosing his first cabinet. The really interesting choice is Bernard Kouchner as Foreign Minister.

Dr Kouchner is a man of some achievement but also most definitely a man of the left. He has been minister several times in socialist governments but above all he is known as the founder of one of the very very few international NGO charities that actually manages to help the people it is supposed to help: Médecins Sans Frontières (Doctors Without Borders).

Mind you they do not seem to vet their Palestinian staff particularly carefully if this news item is anything to go by. Muzab Bashir, a Palestinian from Gaza who has been employed by Médecins Sans Frontières for four years has been arrested and indicted in the Jerusalem Central Court on charges of planning to assassinate senior Israeli politicians, including the Prime Minister.

He blotted his copybook somewhat by becoming the UN’s Special Representative for Peacekeeping in Kosovo. Nevertheless, he is a man who clearly sees oppression and bloodletting where it happens as witnessed by his attack on Saddam Hussein and the preface he wrote to the book that discussed the two million dead.

Naturally, there have been numerous criticisms of Kouchner. How could he possibly suggest that just because Saddam was in charge it was all his fault? Does he not know that he was merely the well-financed pawn of the Western imperialists?

In the run-up to the war in Iraq Kouchner took an unpopular position in France – he supported the war. Up with this the French media would not put and after a few debates and discussions he was virtually banned from it and became persona non grata among the political elite.

Oddly enough, he remains, by all accounts, one of the most popular politicians in the country, which indicates something about French opinion. Appointing Kouchner Sarkozy has shown more clearly than he has ever done before that he does, indeed, intend to change the direction of French foreign policy. My own guess is that we shall see more changes there than in the domestic agenda, if for no other reason that Sarko will run up against all sorts of vested interests. Whereas, in foreign affairs the main source of opposition will come from the Quai d’Orsay and I doubt whether there is that much love lost between them and Sarkozy.

Sarkozy’s other choices are less interesting and leave everyone guessing as to which way the government will go. He has halved the number of ministers, which must be a good thing on principle, and gave positions to do with immigration and law’n’order to his friends:

Longtime friend of Sakorzy Brice Hortefeux was named to lead a new Ministry of Immigration, Integration and National Identity, which is devised by Sarkozy aiming to help unite the country amid rising ethnic diversities and tensions. Sarkozy's campaign adviser Rachida Dati will head the Justice Ministry.

In addition, Eric Woerth will head a new public accounts ministry that will draw up the state budget. Centrist Herve Morin will replace Alliot-Marie as the new defence minister and Christine Lagarde has been named agriculture minister.

The new Prime Minister will be François Fillon a moderate conservative in the UMP (whatever that might mean).

All in all there are seven women in senior positions in a cabinet of fifteen. If nothing else, that will take wind out of Ségolène Royal’s sails. Again.