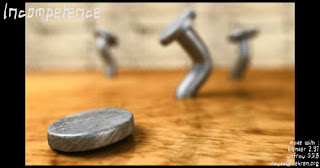 A superb article by Chris Dillow in The Times this morning asks, not entirely rhetorically: "We put up with terrible, inept government. Why?"

Subtitled, "How Whitehall can learn from Tesco and John Lewis", he rails against general government incompetence and the simplistic solution – putting different backsides on Cabinet chairs. "Policy failures," Dillow writes, "aren't due to having the wrong personnel in charge. Nor are they exceptions to the rule of general competence. They are the inevitable result of bad organisational structure."

Dillow then goes on to tell us that one reason why big organisations become inefficient is communication failure:

Subordinates have lots of reasons not to tell bosses the truth. They don't want to burden "busy" people with detail, or rock the boat, or be victim of "shoot the messenger" syndrome. The upshot of this was famously described by the late Kenneth Boulding: "The larger and more authoritarian the organisation, the better the chance that its top decision-makers will be operating in purely imaginary worlds."

The full article is well worth the read. As my co-editor recently wrote: It gives one furiously to think.