The Russians are getting serious To demonstrate beyond a shadow of any doubt that it is not the problems of the Russians in Estonia that bother President Putin but the need to create the image of a beleaguered Russia, it was announced on Russian Centre TV that a new piece of legislation has been proposed.

Last Friday [4 May] the Russian Defence Ministry announced that a presidential decree was being prepared to protect [Soviet] war graves abroad. It should be signed by the end of May. A representative office will be opened in Russian embassies abroad consisting of four to six people and will deal with the protection of [Soviet war] graves and monuments. They will work in the main problematic zones: Poland, Hungary, Romania, Germany, the Czech Republic, China and the Baltic states. For these purposes 1m dollars will be spent every year.

The report raises all kinds of horrible scenarios, some real, some possible, some imagined. It seems that the Polish Ministry of Culture intends to dismantle monuments of the Socialist period but, it has been emphasized by the Minister, not the memorials to the Red Army. Russian Centre TV clearly does not believe these assurances. After all, have the Poles not taken down the memorial to Marshal Konev in Krakow?

At this point one must mention one or two facts about Marshal Konev, who had fought in the Red Army during the Civil War under Klim Voroshilov, Stalin’s closest mate. This meant that the ferocious purge of army commanders in 1938 -39 passed Konev by. In fact, he was rapidly promoted.

During the Second World War his record was so-so but eventually he did find himself commanding the First Ukrainian Front and being in charge of the liberation of Ukraine, Poland and some of eastern Germany. He it was, who stopped the Red Army from crossing the Vistula to support the Warsaw uprising that was put down by the Germans with great brutality.

This strategic decision ensured that the Soviets swept across the country as liberators with no troublesome help from the locals and proceeded to impose their own puppets on Poland as government and, above all, judges. The first post-war trials were of those who had survived the Warsaw uprising.

Marshal Konev subsequently was put in charge of Austria and East Germany, was demoted by Stalin in 1950, supported Nikita Khrushchev in the post-Stalin power struggle (not stupid) and distinguished himself once again by commanding the Soviet troops in Hungary in 1956. 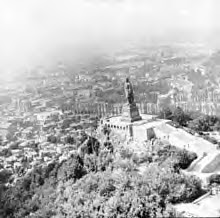 Definitely the sort of person whose memorials one must protect.

Then there are the Bulgarians who are also demonstrating a failure of memory as “most of Europe” has done in the last twenty years.

The city authorities of the Bulgarian town of Plovdiv twice attempted to dismantle the [Soviet] stone Alesha [memorial] and only the country's Supreme Court was able to save the Russian warrior.

The Hungarians, who, incidentally, have taken down most of the Socialist era statuary and put them all into a special theme park just outside of Budapest, are no better from the Russian point of view. (Hey, they remember that Stalin statue and the boots left behind.)

In April this year the World Union of Hungarians collected signatures for the removal of the monument [below left] to Soviet soldiers from Freedom Square in Budapest.

Well, it’s still there but gets vandalized from time to time. Maybe the new protection officers will prevent that in the future. The only reliable ones are the Germans.

After the monument to Soviet soldiers in [Berlin's] Treptow Park [see top picture] was removed for restoration in 2003, rumour had it that it would not return to its former place. But everything turned out well that time: the German authorities spent 1.5m euros on the [monument's] restoration.

Though even there one cannot be too certain and there will be a new protection office in Germany as well. And in China. China? Are there monuments to Soviet soldiers in China? Seems a little unlikely. Maybe it is the Chinese propensity for turning such toys as the “Minsk” aircraft carrier (below) into a tourist attraction that is annoying the Russians. 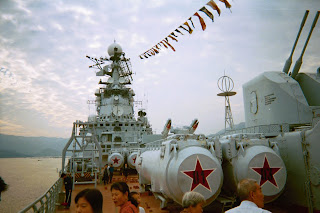 OK, joke over. Let’s be rational here. Most of the mentioned memorials have been moved rather than destroyed and similar events have happened in Russia and other CIS countries. Or is it the graves that are to be protected? Surely, it is better for soldiers to be buried in military cemeteries than in the centre of various cities and towns. Ah yes, but those graves were essential to show the benighted East Europeans who was master.

When it comes to rewriting history, few countries are as adept at it as the Soviet Union was and, it would appear, that the present Russian authorities are happy to live with that and happy to let the people of the country to believe that, which means the people will not know for some time to come what has been done to them, by them and in their name throughout the twentieth century.

Finally, an interesting point is raised in the report. Exactly, what will those protection groups do if there is an attempt to move either the remains of Soviet soldiers or a memorial to them? Will they become involved in the ensuing squabble? That might cause an unpleasant international incident. All but one of the problem countries are member states of the European Union. It looks like Javier Solana might once again be reluctantly dragged into this messy dispute.