There is always the internet 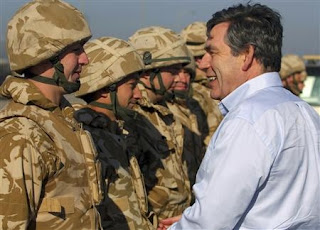 What is so depressing about the dead tree media, these days, is that they seem to have given up any pretence of reporting news – on the key issues at least. As we reported recently, speculation has become their main fare.

Thus it is that The Sunday Telegraph splats over its front page that, "Bush gets ready for Iraq U-turn by Brown", with the story telling us that Gordon Brown is prepared to risk the future of the "special relationship" with the United States by reversing Tony Blair's support for the Iraq war.

It turns out, however, that this is based on a report of a supposed briefing by unnamed White House officials, who have apparently told Bush to expect an announcement on British troop withdrawals from Mr Brown during his first 100 days in power. This, we are told, would be designed to boost the new prime minister's popularity in the opinion polls.

Now compare and contrast that report with an offering from The Times, which tells us:

The Middle East peace process and Iraq will be key foreign policy priorities for Gordon Brown when he takes over as Britain’s Prime Minister at the end of June. As he launched his campaign for the Labour Party leadership, Mr Brown said that he would visit the region as soon as he could. It swiftly emerged that he hopes to go to Iraq to see military chiefs and the Iraqi Government.

It is assumed that Mr Brown would speed British withdrawal if he could. Under present plans, Britain is due to hand over control of Basra by the end of the year and then to maintain a much-reduced troop presence at the airport.

Mr Brown would love to enter the election in 2009 or 2010 with Britain’s engagement in Iraq already becoming a memory. And if there is any chance of speeding up the timetable or reducing the 7,000-strong troop presence he will do so. Much will depend on what happens in the US. Although he will not allow himself to become as close to President Bush as Tony Blair did, Mr Brown will not want his first foreign policy acts to antagonise Washington.

Here there is still a considerable element of speculation, but the tenor differs so completely from the report from its rival paper that you wonder whether the two actually inhabit the same planet.

One also wonders what purpose is served by another report from The Telegraph, headed, "US surge is failing, says UK's Iraq envoy". This is a claim from "one of Britain's senior military officials in Baghdad", none other than Alastair Campbell, the outgoing defence attaché at the British Embassy in Baghdad.

What this supposedly right-wing paper might care to ponder is that in airing this premature and ill-informed view, it is running exactly the same line being conveyed by such measured organs as Aljazeera and the Australian Green Left Weekly.

The failure of the right-wing press to deal with the Iraqi war intelligently was precisely the point we made yesterday and it is uncanny how journals like The Telegraph so well prove the point.

As regards the "surge" in Iraq, there are many fascinating issues involved, about which any responsible journalist could write a riveting report. Yet, you will have to go a long, long way - to California and the North County Times, in fact – to get a good analysis of what is going on.

The report published there is amplified in the blog Small Wars Journal and stands as an example of what could be achieved if we had a grown-up media, and an audience that was prepared to read the material.

Sadly though, the diet of speculation, bolstered by a never-ending torrent of political trivia, seems to be far more attractive to an average readership, than hard news and analysis. In this sense, as do we get the governments we deserve, so too – it seems – we get the media we deserve. For the rest of us, there is always the internet.