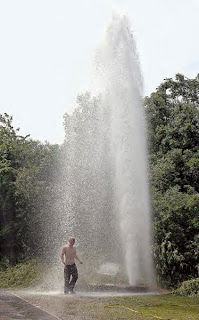 Booker’s column this week was packed with all sorts of goodies. My colleague has covered one of the stories. We also get a discussion of the metric martyrs with credit given where it is due and not to some upstart Tory MEP. Then there is the question of Ofwat, the water companies and our wretched so-called legislators who are clearly ignorant of the basic facts of life.

This has been a rainy winter and spring (apart from April, which will be the month the man-made-climate-change freaks will cite endlessly) yet there are still hose bans in some parts of the country.

Or one could eschew both of these rather specious explanations and dubious sources and look at the truth as Christopher Booker has done this Sunday. Mending leaks and replacing water pipes costs money. Right? Water companies have the money to do so. Right? Wrong.

The article leads us back to a Starred Question in the House of Lords on the subject of water supply and demand. Most of the discussion is of relatively limited interest until we get to Lord Pearson’s intervention, which goes to the nub of the matter of money.

My Lords, is the Minister aware that by 1997 we had spent some £48 billion on three EU water purification directives? Will he bring us up to date on the money that has since been spent on those directives? Does the noble Lord agree that if we had been wiser and had we spent the money on what really mattered—namely, infrastructure and supply—we would not be in the position that we now face, however much rain we occasionally get and whatever the quality of his rain?

Lord Rooker’s response on behalf of HMG was subdued:

My Lords, I do not think that anyone can criticise. I have not come armed with all the figures on what we have done with the infrastructure in the past 10 years. Billions of pounds have been spent over and above that previously spent. I will find out what has happened to the money that the noble Lord referred to and I will write to him.

He has now written to Lord Pearson of Rannoch and given an answer. Booker quotes it in his article:

Spending to comply with the directives now totals £65 billion. Only £14 billion has been left for infrastructure.

This raises a couple of interesting points. The first one is obvious and Booker makes it crystal clear: our so-called legislators not only do less and less legislating, they know less and less about how it is done. (And I bet they don’t know how sausages are made either.)

An equally important issue is the ease with which certain notions about the environment and what benefits it are accepted. Whenever the subject of the water directives came up in the past – mostly brought up by Lord Pearson of Rannoch – the government would blithely explain that the cost of implementing one of them would be somewhere between £2 billion and £8 billion or some suchlike figure. Not to worry, it will all benefit the environment. Except that the environment in this country would benefit far more from an improved infrastructure.

Similarly, we have never had a cost/benefit analysis in either economic or environmental terms of the great recycling effort. It’s all for the environment or our children’s future. But is it? Time to start asking for that analysis, methinks.

More on the subject over at One London.