It ain't going to happen in June 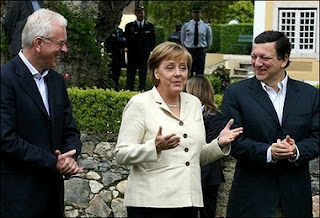 It wasn't cancelled after all – the meeting called by Barroso in an attempt to break the "logjam" over the EU constitution. This was the one in Sintra, in Portugal, and it was actually held yesterday, attended by Merkel, Barroso, the EU parliament president Hans-Gert Poettering, Portugal's premier Jose Socrates and Slovenian premier Janez Jansa.

This is more or less the same formula that was devised for the signing of the Berlin Declaration – the EU presidency and the heads of the institutions plus, this time, the heads of the two governments next in line for the presidency.

Despite this, according to eux.tv there was no "concrete progress". That left Portugal's Socrates to declare that the German government had to secure a "precise mandate" by the 27 member states by the time it hands over the presidency to Portugal. Otherwise, he said, Portugal would not continue consultations on the constitution during its own EU presidency.

The negative outcome of these talks provides further indications that there is next to no likelihood of agreement being reached on the text of a new treaty by the time of the next European Council on 21-22 June. Yet, despite the mounting evidence of continued disarray, even yesterday, The Daily Telegraph was trotting out the same canard that Blair was off to Brussels in June to sign Britain up to a new EU constitution.

Furthermore, with Portugal (which, like Germany, still has not ratified the EU constitution) and then Slovenia next in line for the presidency, the chances of agreement over the next twelve months looks equally remote. That then leaves Sarkozy, in the second half of next year, when France assumes the presidency.

By that time, his reported agreement in principle with Blair on a "treaty lite" – after a meeting on Saturday, will be distant history. Gordon Brown will be representing Britain and anything can happen. But, despite what the Telegraph and others say, it ain't going to happen in June of this year.