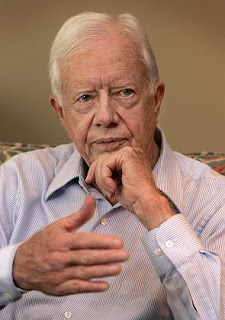 The former American president Jimmy Carter has written a book which is particularly critical of Israeli and American policy. It's called "Palestine: Peace not Apartheid".

Compare the soft, deferential interview he gets on the BBC Radio 4 Today programme with the grilling John Bolton gets.

Is the BBC biased? Well, actually, even the BBC admits it .

Listen to the BBC's Washington correspondent, Justin Webb – four minutes into the programme. But it's not a "corporate bias", don't you know. It's just that it is "easier to criticise and run down open societies".