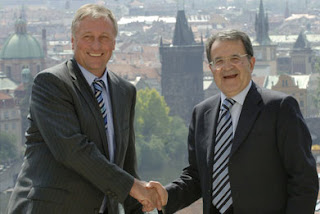 It is hard to work out whether this is something lost in translation, but that is what Italian prime minister Romano Prodi is telling his Czech counterpart Mirek Topolanek.

They were discussing the new EU treaty in Prague yesterday and, during a joint press conference Topolanek told Prodi that he would not accept any "quasi-constitutional symbols" in the draft, and that included the post of European foreign minister.

Then, according to Prague's CDK , Prodi said Italy was "ready for compromises, but that it will not accept any compromise." This is beginning to sound like a classic EU negotiation, especially as, up on the Czech presidential website went the message:

The president [Klaus] disagreed with Prodi's opinion that it would be better if the EU member countries each gave up its foreign policy and replaced it with single [foreign policy] jointly pursued by the whole EU, which would be based on a majority voting.

Both premiers, however, say they are happy to accept what CDK calls the "new constitutional treaty" may be based on the original text, but even that is not what it seems. Prodi wants the text of the failed constitution to be used as the "starting point" for a new document while Topolanek agreed that "it is possible to base the future text on the treaty."

Topolanek is also is adamant that the new treaty should not include the Charter of Human Rights and is sticking to his government's view that EU reform should make it possible to transfer powers not only from national governments to Brussels, but also in the opposite way.

On this, Czech Radio adds some useful detail. Topolanek is concerned that smaller countries like the Czech Republic will lose decision-making power under the treaty's new voting system. And, since Prague's chances of pushing through an amendment are minimal, the Czech cabinet wants to member states to have the right to veto certain decisions made in Brussels.

Unlike the Poles, who want to up their voting power to match German's, the Czech government is thus pushing for an entirely new clause that would give state governments the right to overrule certain EU regulations. Deputy Minister for European Affairs, Jiri Sedivy says:

We see the definition of shared competences and the definition of competences in the draft constitutional treaty as a very positive step forward and a basis for further debate but we would like to see fewer ambiguities in that area, especially in the shared competences. We would also like to suggest that the possible further transfer of powers in the area of shared competences should not only be a one-way process, which means from the level of nation states to the level of the European Union. We would like to open the possibility, according to the subsidiary principle, to initiate a transfer of the exercise of a certain competence back to the member state level if and when the exercise of competence at the union level proves to be ineffective.

Not least of the Czech government's reservations are with the transfer of power relating to Brussels' increasing encroachment in the justice system. The cabinet opposes plans, for example, for the cross-border sharing of evidence in criminal proceedings. It also wants the right veto some joint EU laws in the areas of consumer protection, the environment, and social policy.

All this, of course, is in direct conflict with the Sarkozy line, with the new French president talking about sweeping away a whole raft of vetos. And, with Prodi wanting to bring in majority voting to foreign policy, things are beginning to get interesting at last.